Working with NOAA, SAIC develops, tests, and implements commercial tsunami buoy systems under a NOAA-patent license agreement. Under this license, SAIC has produced more than 35 second-generation buoy systems based on the NOAA Deep-ocean Assessment and Reporting of Tsunamis II (DART® II) system, and two types of third-generation systems based on the Easy-to-Deploy (ETD) DART technology.

SAIC’s second- and third-generation buoy systems are currently operational in maritime countries worldwide, including Australia, Chile, China, India, Japan, Russia, and Thailand, and are gathering actionable data for its users and NOAA. Recently, SAIC provided developmental 4G payloads and bottom pressure recorders to NOAA in support of a 4G research effort off the coast of Chile.

Now, as SAIC enters another decade of work with NOAA, the company is manufacturing more than 85 percent of world’s commercially deployed tsunami buoys, helping to make the concept of a globally interconnected, tsunami buoy network a reality.

NOAA’s DART II buoys quickly caught on, and soon were deployed to 39 locations in the Atlantic and Pacific oceans, and the Caribbean Sea. These new robust DART II systems were the envy of the international community and the need for a commercially-available version grew, resulting in SAIC’s highly-experienced team of oceanographers and engineers collaborating with NOAA to explore the feasibility of a commercial DART II system.

In 2006, the SAIC Tsunami Buoy (STB) was born, and the company began manufacturing its first commercial prototype tsunami assessment system. Like the DART II system, the STB has three subsystems: a bottom pressure recorder (BPR), a surface communications buoy, and a mooring subsystem.

With the goal of providing timely, accurate, and reliable sea-level data that can be integrated into international disaster warning systems, SAIC engineers determined that the cornerstone of this effort would be the development of a technically advanced, commercially available, deep-ocean sensor that could match the capabilities of the NOAA DART system, which currently protects the coastal United States. In October 2006, this commercial prototype system was deployed approximately 200 nautical miles west of San Diego, at a depth of 3,875 meters. It was deployed approximately 28 nautical miles south of a NOAA DART II system in order to perform a comparison of performance. Over the next year, the STB team successfully completed an at-sea test, including an independent evaluation by NOAA’s National Data Buoy Center (NDBC). 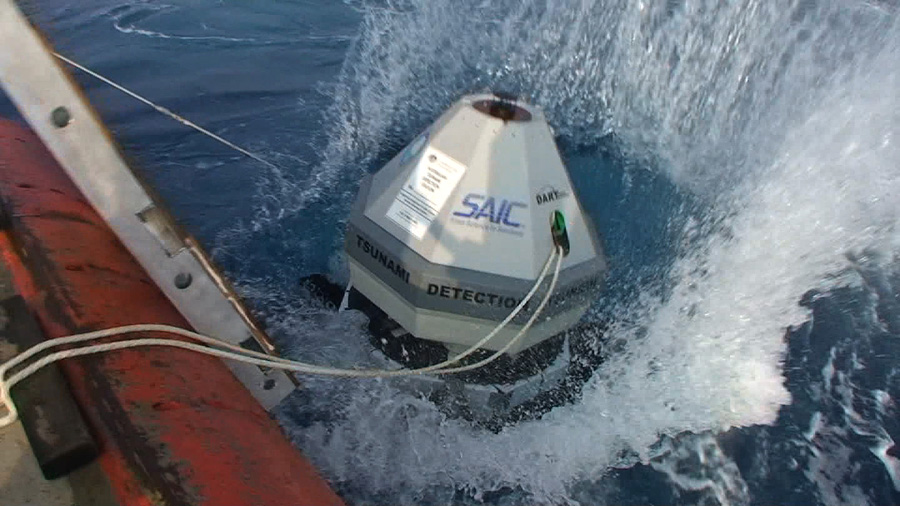 Reliability and Performance
During the last 12 years, DART Technology developed by NOAA Pacific Marine Environmental Laboratory (PMEL) is considered the most reliable tsunameter technology and is used in more than 95 percent of all currently globally deployed tsunami buoy systems. 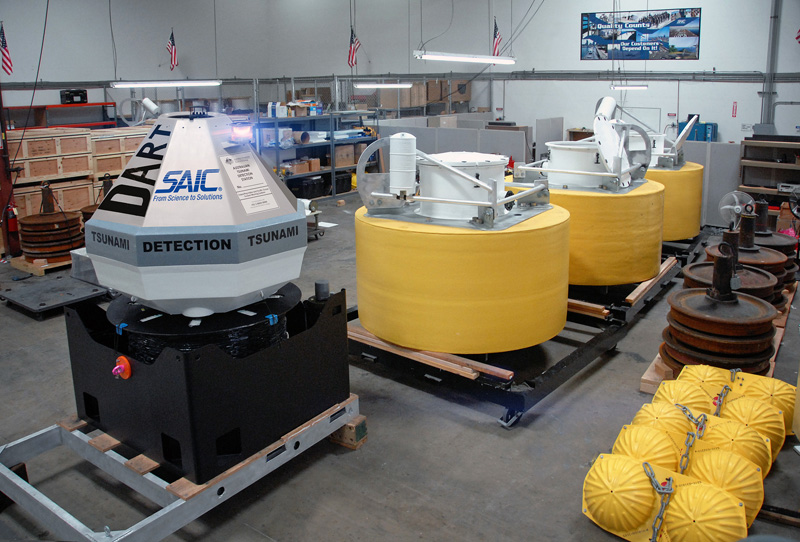 ETD DART and STB Systems in final stages of production. 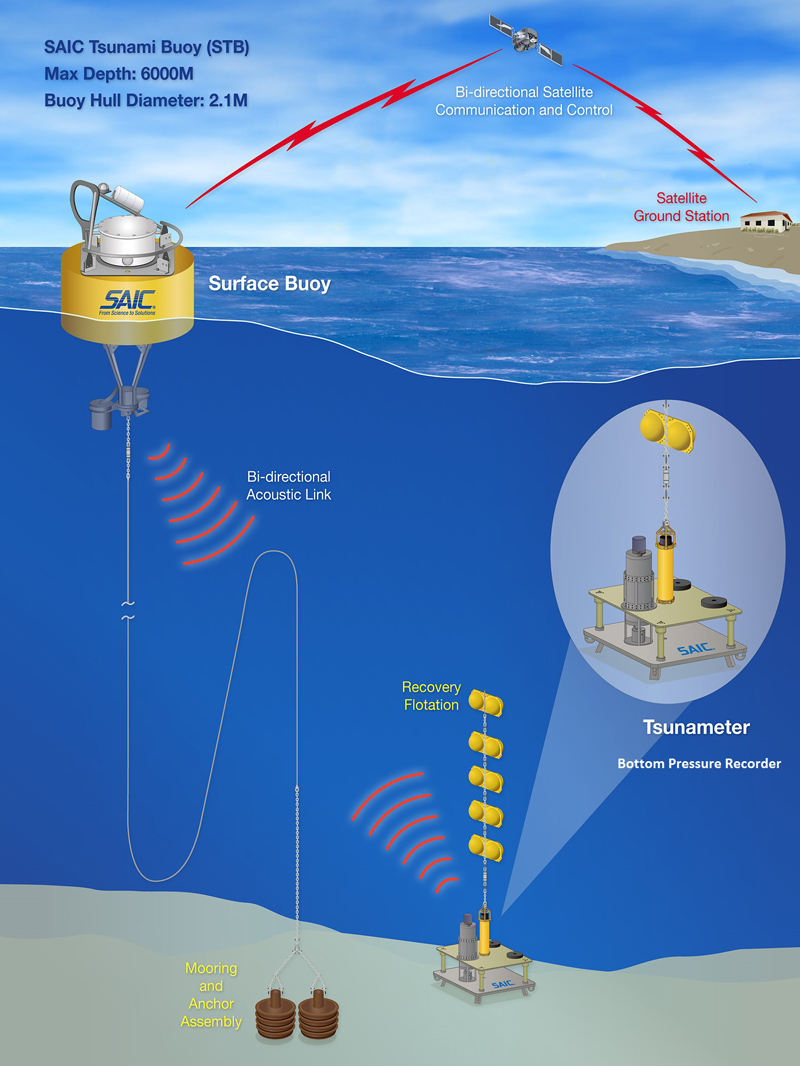 As part of SAIC’s licensing agreement, the SAIC team began production of third generation (3G) commercial ETD DART systems that are smaller in size and weight compared to the STB, but still maintain DART performance standards. Despite its small size, the ETD DART’s performance has been exceptional in challenging locations. One of the systems deployed in the Coral Sea successfully weathered the impact of a Category 5 cyclone (winds 130 knots, seas 12 meters), and several weeks later accurately reported data as the remnants of the 2011 Tohoku tsunami traveled into the region.

SAIC’s ETD DART buoys have been deployed in the Coral Sea, the Northwest Pacific Ocean (south of the Kuril Islands, and further south off the coast of Bali), and in the Tasman Sea.

Data Collection for the Greater Good
With much of the world’s population concentrated in coastal regions, the potential impacts of destructive tsunamis continue to grow as an international concern. Specifically, significant destructive tsunamis in Chile, the Indian Ocean, Japan, and the South Pacific Ocean have demonstrated the requirement for a global network of reliable deep-water sensors which can provide accurate and timely assessment of sea-level data to regional and national tsunami warning centers.

SAIC tsunami buoys record water temperature and pressure at the sea floor every 15 seconds, and the pressure measurements are converted to values that indicate the height of the water surface above the ocean floor. These data are then sent via satellite to national weather services and warning centers of the buoy owners every 6 hours under normal circumstances. When there is an event, such as a pressure anomaly, the buoys immediately send initial data reports followed by 17 reports over the following three hours before returning to normal reporting mode. 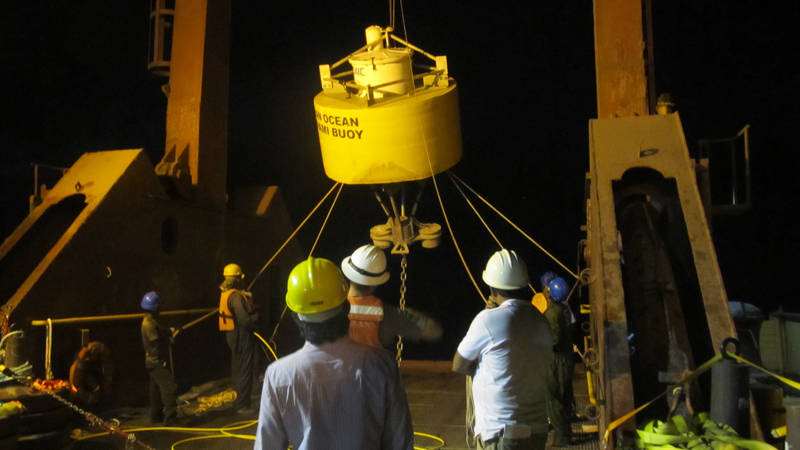 STB-MF System being deployed in the Bay of Bengal.

After SAIC customers receive data off their buoys, they typically disseminate it to the Global Telecommunication System (GTS) of the World Meteorological Organization. The GTS enables member nations to exchange real-time data critical to detecting, reporting, and forecasting meteorological hazards, including tsunami data and warnings.

A New Era for Tsunami Buoys
After producing the ETD DART, SAIC found that it could integrate some of the newer 3G ETD DART technologies into its existent 2G STB to create a hybrid third-generation STB-MF tsunami buoy system. These upgrades included:

However, one challenge remained. A long-time goal of tsunami assessment has been to develop a sensor that can detect and measure near-field tsunamis as close to the generation area as possible. If this is accomplished, the country will have much faster access to data, which could improve evacuation time.

NOAA PMEL developed a fourth-generation (4G) DART system that has the potential to solve the near-field data collection challenge. The 4G DART includes a new and improved pressure sensor, increased sampling rate, advanced internal processing software, and upgraded power management. Developmental 4G DART systems have been deployed and are currently being evaluated off the Chilean and Oregon coasts with good results. A commercial 4G system is expected to be available within the next 12 months.

Although still in its infancy, the concept of a global tsunami buoy network is becoming a reality. SAIC’s highly-successful line of commercial tsunami buoys is a major contributor to this evolving network, making up nearly 85 percent of the commercial systems currently deployed. Without a global network consisting of many buoys and data sharing capabilities, countries are exposed to risks similar to the 2004 tsunami disaster in the Indian Ocean where more than 230,000 people died.

With the ability to quickly transition new research and technology into operational systems, SAIC looks forward to future deployments of 4G STB-MF and 4G ETD DART in support of the global tsunami buoy network.