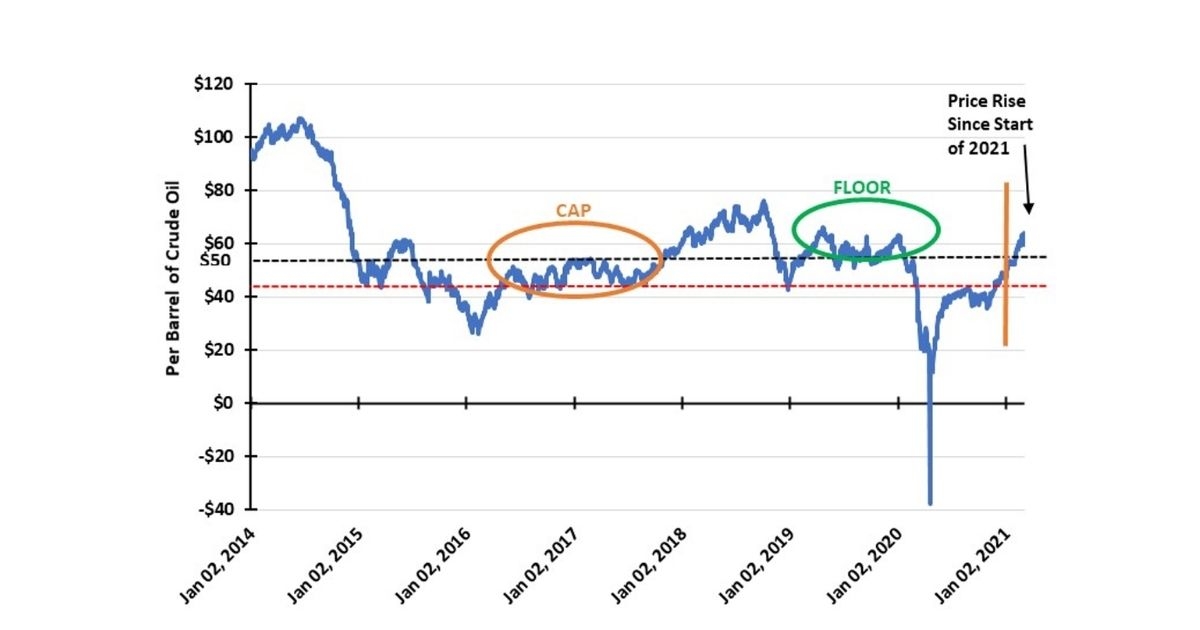 Since the end of 2020, WTI crude oil futures prices have climbed over 30 percent, reaching the previously unimaginable $64 per barrel level. People were growing optimistic for an oil demand recovery later this year. Driving prices higher is the arrival of multiple Covid-19 vaccines pulling forward prospects for control of the virus. Imagining an end to economic lockdowns, coupled with massive government infusions of stimulus, means visions for significant economic growth—good for oil demand.

OPEC’s decision to cut back its output has helped erase much of the global oil inventory glut that built when Covid-19 forced a global economic shutdown last spring. The recent Texas blackout further aided the inventory drawdown, supporting higher oil prices. These fundamental trends, while still somewhat tenuous due to the overhang from excess oil production capacity, are encouraging. 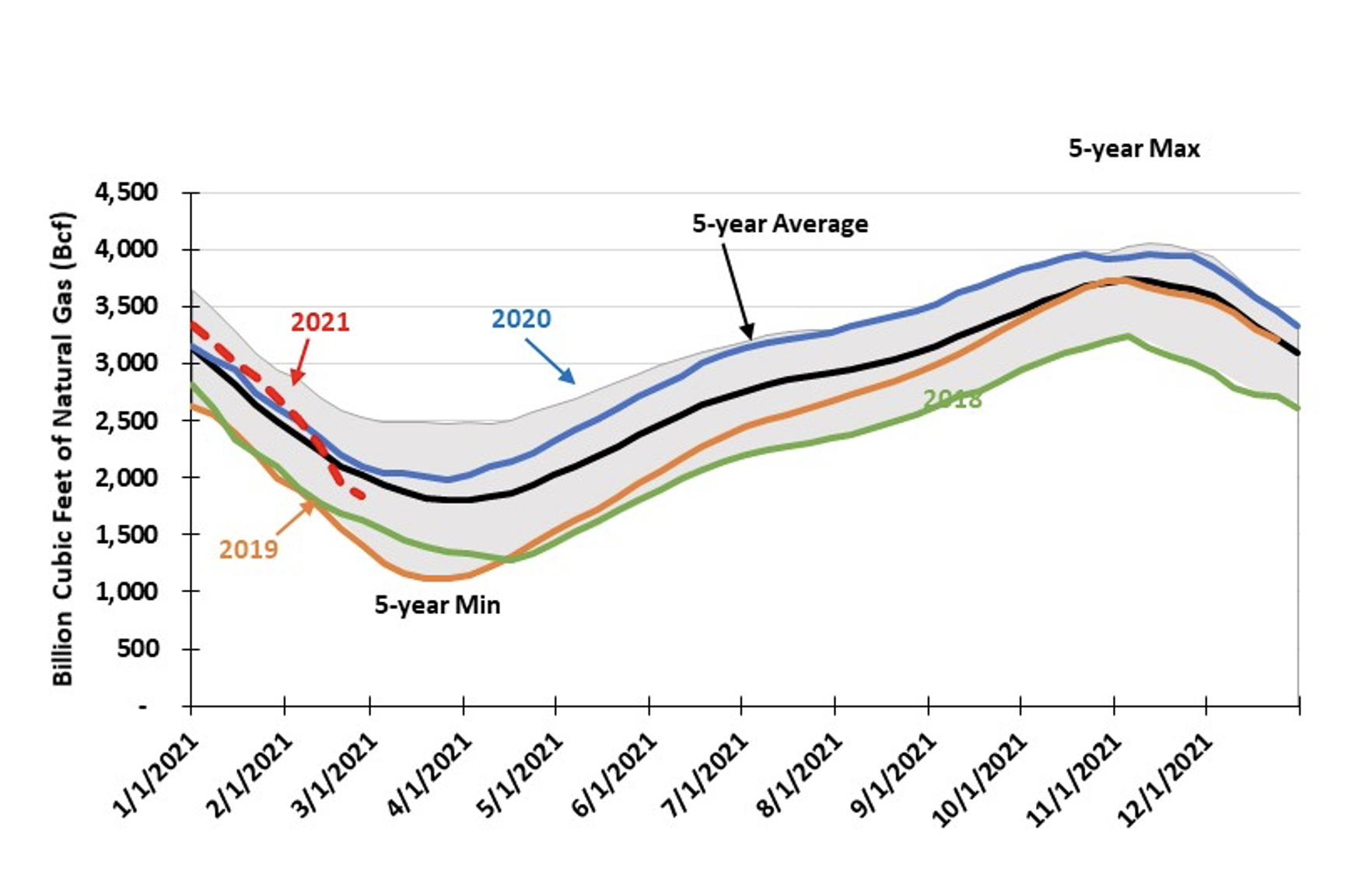 Market participants wonder whether OPEC+, which has worked hard to restore its dominant role in the global oil market, will remain disciplined to lift prices higher. Based on the decision out of the group’s March 4 meeting to hold output flat in April, while allowing Russia et al to add roughly 150,000 barrels a day of new supply, suggests it has that discipline—at least for another month. Restraining supply growth at a time when demand is uncertain is critical for keeping oil prices elevated, exporter incomes growing and optimism rising.

Financial market technical factors are also supportive of higher oil prices. The value of the U.S. dollar has fallen, making oil cheaper for foreign buyers as oil is priced in dollars. The Biden administration’s push for massive financial stimulus is coming at the expense of a strong U.S. dollar. This stimulus and associated debt increase will further diminish the dollar’s value, contrary to its historical support from U.S. presidents. The dollar’s value also partly explains the strong stock market performance of emerging market and small cap stocks, both of which traditionally are associated with higher commodity prices, especially crude oil.

The strong performance of cyclical stocks—those whose revenues and earnings depend on stronger economic activity—also suggests support for higher commodity prices. Investors are wondering whether these trends signal we are embarking on another super-cycle for commodities in which global economic activity drives consumption and investment higher. The scales appear to be tipping in favor of stronger commodity demand, which means higher prices. That is especially true given years of underinvestment in commodity productive capacity, limiting future supply just as demand grows.

The oil and gas industry leads the commodity producers’ commitment to better corporate financial stewardship, which means limited output growth, improved balance sheets with reduced debt levels, and returning more cash to shareholders. Whether that discipline holds, as oil prices soar and supply/demand balances become tighter, remains to be seen. In the meantime, the trend in oil prices is higher. How fast and how high remain unknown. 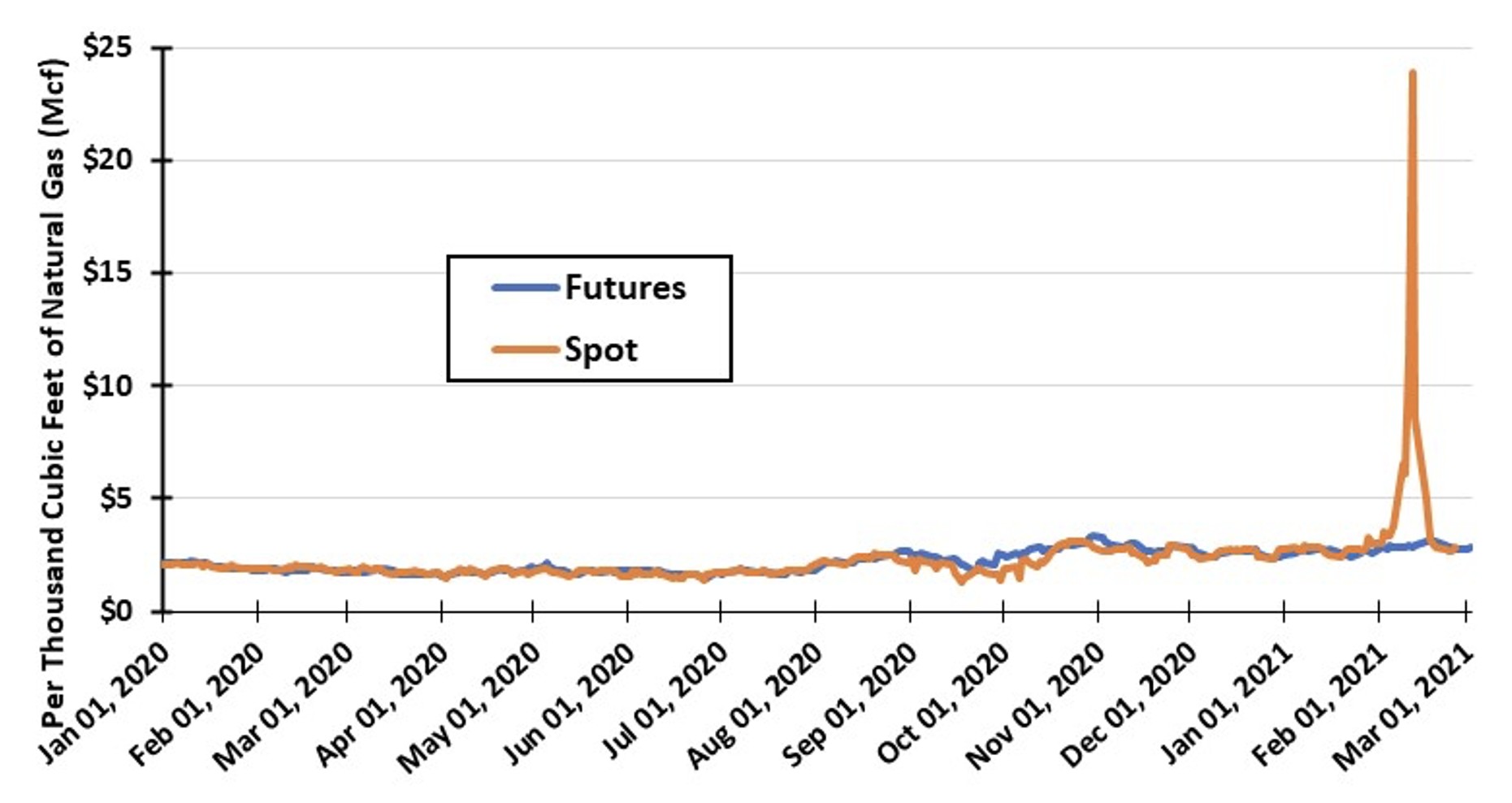 Valentine’s Day, a polar vortex descended from the Arctic and delivered bitter cold temperatures all the way down to the Gulf Coast. It produced a major shock to the natural gas industry. With record low temperatures and unusual snow and ice conditions, utilities attempted to navigate a minefield of unstable fuel supplies for electricity generation, while struggling to keep the lights and heat on for Texas residents. Not all utilities were successful, as the state’s power grid manager forced them to shed upwards of 10 gigawatts of demand just as cold temperatures peaked. The result was blacking out power to eight million Texans. The bitter cold temperatures also disrupted power markets in adjacent states and Mexico, further disrupting the lives of millions of people.

The havoc in the natural gas market created by the cold temperatures and fuel disruptions appeared in spot gas prices. While Henry Hub futures prices rose about ten percent between the day prior to the arrival of the cold spell and two days following its peak, spot prices jumped nearly eightfold. Gas buyers were frantic for supply! In Texas, Oklahoma and Kansas, wellhead gas prices exploded, jumping by as much as 100- to 200-fold. Several small gas producers were selling their supply on the spot market for $500 per thousand cubic feet, at a time when Henry Hub futures prices were $3.25.

Technical analysis tells us that despite continuing the string of recent large weekly gas storage withdrawals, the market is tightening. It may be two billion cubic feet per day too tight. That means gas prices will need to rise to shed demand by next winter if additional supply is not forthcoming. Financial discipline by gas producers seems destined to limit supply growth, which could offset the demand tightness. Higher gas prices will cut into gas use by power generators, as well as limit liquefied natural gas exports. Many people do not expect either condition to happen, but they might want to look at the latest Energy Information Administration Short-term Energy Outlook. It shows power generation use of gas next winter equal to 2017’s use and below the consumption of intervening years. Likewise, the EIA sees LNG exports flat with last spring when global energy demand collapsed, and buyers were cancelling cargos. If the EIA’s outlook is prescient, their expectation of sharply higher gas prices will happen.