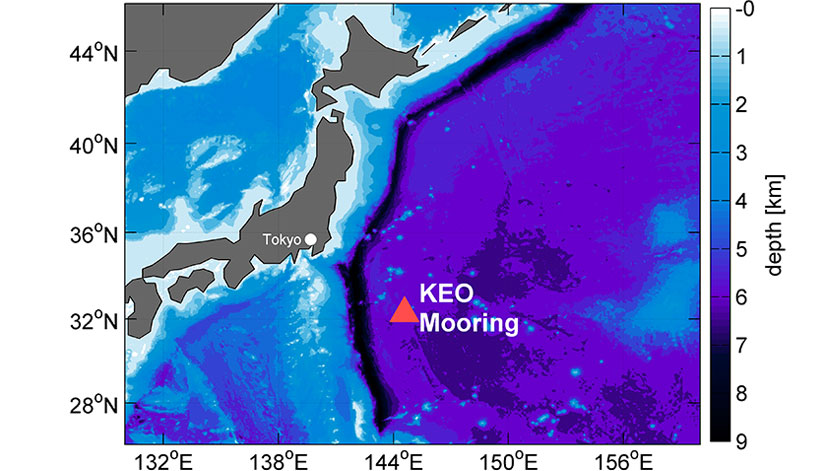 Exchanges of heat and moisture between the ocean and the air have a tremendous impact on global weather and climate. To improve satellite products and forecast models, as well as our understanding of air-sea interactions, NOAA gathers meteorological and oceanic data from autonomous platforms. The resulting data empower the world to adapt to climate variations, while improved forecast models help reduce our vulnerability to weather and climate extremes.

Since 2004, the Kuroshio Extension Observatory (KEO) mooring has been monitoring the atmospheric and oceanographic conditions of the Western Pacific in real-time. Sea-Bird’s Inductive Modem system (IM) is the backbone of the KEO oceanographic monitoring system, transmitting data from a suite of over 20 subsurface instruments to the surface buoy, where it is relayed back to users hourly via satellite telemetry. For example, on 19 September 2009, the center of Typhoon Choi-Wan passed 40 km southeast of KEO, allowing the mooring to capture the upper-ocean response to strong atmospheric forcing (Bond et al., 2011). That was an extreme event, but the same processes are still observed by KEO in 2017. This article briefly describes how inductive mooring systems are the optimal platform for observing these processes in real-time.

The KEO mooring is one of several Ocean Climate Stations (OCS) operated by the National Oceanographic and Atmospheric Administration’s (NOAA) Pacific Marine Environmental Laboratory (PMEL) in Seattle, Washington. Two controllers on the buoy connect a meteorological instrument package and a chain of subsurface instruments to an Iridium satellite modem. Data are obtained hourly from the surface down to 550 meters and transmitted for use in weather forecasting and operational oceanography, as well as for studying upper ocean circulation, climate and processes.

The deployment conditions for these moorings are harsh. Situated in the Kuroshio Extension, a recirculation of the Kuroshio western boundary current, the KEO mooring endures tropical cyclones and winter storms (Cronin et al., 2008). Surface currents, which can exceed 3 m/s, and persistent waves stress the storm- adapted mooring and the instruments. During typhoon season, storms pass within 500 nm of the buoy nearly every two weeks. Since 2009, 11 storms have passed directly over KEO, including 7 typhoons. Worldwide, economic damage caused by tropical cyclones approaches $26 billion annually. One third of all tropical cyclone activity occurs in the Northwestern Pacific Ocean. Data taken within typhoons from storm-adapted moorings such as KEO are used to improve short-term and seasonal storm predictions in the region.

The dynamic response of the upper ocean to atmospheric forcing is captured by a string of subsurface instruments connected with the Sea-Bird Inductive Modem system. Hourly temperature and salinity data are obtained from more than 20 sensors, including SBE 37-IM MicroCATs and SBE 39-IM Temperature Recorders with integrated inductive modems. Near-surface current data comes from Sontek Current Meters or Nortek Current Profilers connected to the real-time system with integrated Sea-Bird Inductive Modem Modules (IMM), the SBE 44 Underwater Inductive Modem (UIM) or the Underwater Inductive Modem Module. These instruments are clamped to a 700 meter long inductive cable. The cable transmits commands and data between the instruments and the Sea-Bird IMM within the PMEL-designed FLEX subsurface connection to the surface buoy.

A real-time data telemetry system also enables remote troubleshooting and data security. If sensors go offline (equipment failures, ship strikes or even fishing vandalism), an appropriate response for annual servicing and repair can be planned in this remote location. Data that are transmitted back is stored on external servers, insuring data recovery even in the case of catastrophic sensor loss. 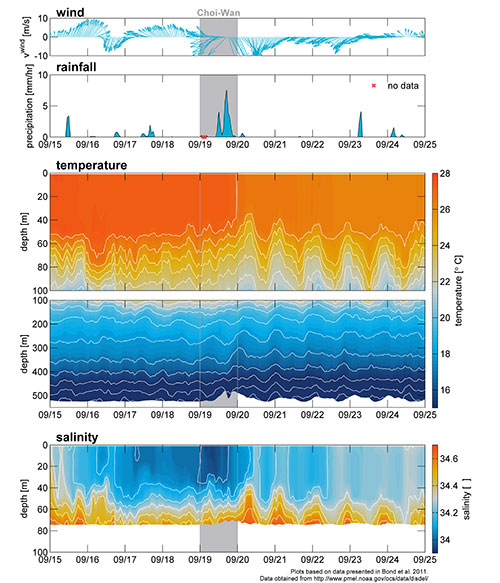 Wind and rainfall from the meterological package deployed on the top float of the KEO mooring are shown in the upper two panels. Subsurface temperature data are shown below, with the upper 100 m enlarged. Subsurface salinity is in the bottom panel. Typhoon Choi-Wan went past the mooring on 19 March and is highlighted in gray.

On September 19, 2009, the center of Typhoon Choi-Wan passed 40 km to the southeast of the KEO mooring as a Category 1 typhoon. The string of underwater instruments detected upper ocean cooling, dynamic responses to wind and freshening by rainfall caused by Choi-Wan. The data also include the first direct observation of precipitation with a rain gauge over the open ocean during a tropical cyclone (Bond et al., 2011).

As tropical cyclones transit across the ocean, they leave a cold wake in their trail. Turbulence generated by winds and waves mix cool water upward to the surface. The formation of the cold wake can be directly observed in subsurface data. As the storm passed the KEO mooring on September 19th , the upper 50 meters became cooler and saltier as deeper water mixed upward to the surface. Cold wakes alter upper ocean heat content, influencing the subsequent typhoon evolution that is fueled by air-sea fluxes.

Bond et al. (2011) also observed storm-generated internal waves in KEO data. An impulsive change in wind direction on September 19th caused water to move up and down between 40-50 meters. This pumping at the base of the mixed layer created internal waves, which propagated downward into the ocean interior. Heaving density layers by internal wave crests and troughs can clearly be observed in the thermocline between 200 and 300 meters.

Comparing atmospheric data from the surface meteorological package with subsurface oceanographic data, Bond et al. (2011) differentiated changes in salinity associated with precipitation from those caused by advection, the horizontal movement of water. There was a period of decreased salinity down to 30 meters on September 18th , when strong rainfall was recorded. Later freshening events on September 20th and 21st were caused by currents moving freshwater resulting from nearby rainfall past the mooring.

This case study illustrates how a densely-instrumented mooring can be used to make observations of complex ocean processes in dynamic and challenging conditions. By combining the suite of instruments with real-time data telemetry, these data can also be assimilated into regional forecasts. These data can also be used for model comparisons and validation, a tool for determining whether the underlying physics are correct for meteorological and climate models.

Real-time data from the KEO mooring were used in model simulations to forecast the path of Typhoon Lionrock in August 2016 as it turned towards Japan.
Scientists Study Behavior of Tropical Storm Lionrock as it Turns Toward Japan

Data from the OCS mooring Ocean Station Papa are used in conjunction with gliders and nearby OOI moorings to study chemical and physical processes in the upper ocean.
North Pacific Ocean Processes

Data from the KEO Mooring can be downloaded at the NOAA Ocean Climate Station Website.