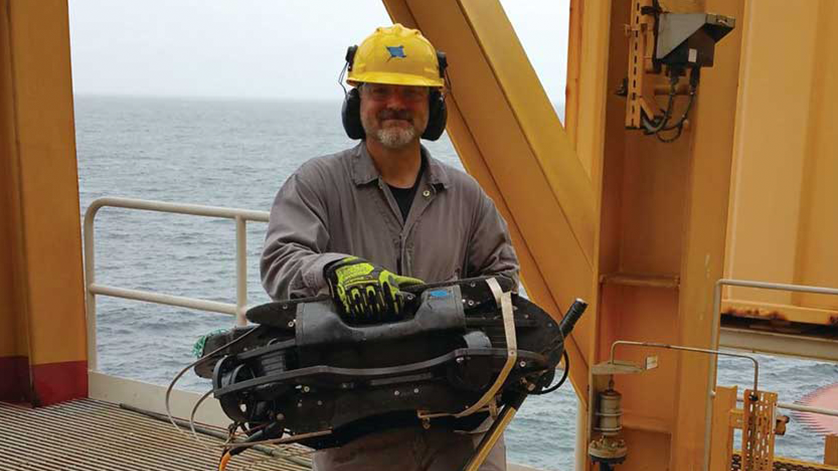 The need for and difficulties of external inspections of giant Floating Production, Storage, and Offloading (FPSO) units might not be obvious. The most important aspect of the inspection of the hull and underwater parts of the vessel is that it is—indeed—a vessel. As such, it is required to undergo regulatory inspections as specified by the governing classification society and must have similar inspections on the same schedule as any other oceangoing vessel. However, there are two serious challenges that other vessels do not have to face.

First and foremost is that an FPSO is moored and services an oilfield for years at a time. This means that it cannot be sent to dry dock without significant expense. As a result, coral and bio growth on the hull can be much more significant than on a vessel that moves regularly. For the kind of close visual inspection (CVI) required of weld seams and other critical areas, bio growth must be removed.

The second challenge is the nature of the operations conducted— many nonstop—on the FPSO as it receives, processes, stores, and offloads product. There are very serious economic and operational challenges if the inspection process interrupts these processes or challenges the safety of the ship.

Using an inspection class ROV for underwater inspection in lieu of dry docking (UWILD) was pioneered by VideoRay LLC of Pottstown, Pennsylvania more than 10 years ago. Classification societies such as ABS and DNV and regulatory enforcement agencies like the U.S. Coast Guard have approved VideoRay equipment for this purpose. The process is demonstrably faster, more efficient, more effective, and safer than the alternative of using divers to collect information. The increase in safety is obvious—the risk of an injury with divers is significant, and the risk with ROV operators is negligible.

The increase in efficiency is the result of two distinct advantages that the ROV operation has over a diver solution. The first is more obvious—the inspector has real-time control over what is inspected so he/she can more easily be satisfied and move on, resulting in faster inspections with less time out of service. The second advantage, however, is often far more important. For many vessels, water intakes and outflows and other moving parts such as rudders need to be tagged out before a diver can get into the water. ROV operations require far less logistical support and do not require formal tag outs to operate, which ultimately saves time and money by keeping the vessel in service during the inspection.

For these types of inspection operations, the VideoRay Pro 4 is overwhelmingly the ROV model of choice.

For this particular FPSO, the task was to perform the 5- year special inspection. About 2.5 years ago, the special inspection was performed with divers for a total cost of approximately US$3,500,000. The primary methodology was to use a dive spread from a supply vessel. Hard coral removal was performed by divers with hammers, increasing the risk of coating damage to the hull coating, a major problem since coating damage can lead to a shorter field life.

It can be demonstrated that the most effective technique for removing marine fouling is cavitation. During cavitation cleaning, an intense shockwave of microscopic bubbles quickly and effectively removes fouling material without damaging the surface being cleaned, particularly painted or coated vessel hulls.

For many years, VideoRay operators have attempted to mount cavitation cleaners on VideoRay Pro Series Ultra-compact ROVs with limited success. Most of these operations were severely challenged by the mass and thrust of the 3-thruster vehicle that is, for the most part, incapable of maneuvering the cavitation cleaner lance and stiff high pressure water hose.

Other, off-the-shelf light work class vehicles are capable of doing this kind of job, but their weight, size, cost, and deployment issues are prohibitive in an FPSO environment (as well as most other UWILD situations). Since they are too heavy and bulky to transport to the FPSO, they require their own vessel, which requires a separate anchor, mooring, or liveboating operation and adds expense and difficulty as well as potential conflicts with FPS operations. That is why much of the cleaning required for FPSO UWILD CVI is done by divers removing marine fouling using hand tools as described above. Until recently, all ROV manufacturers based their vehicle deliveries on a few distinct models, each with their own set of thrusters, cameras, and control systems. A limited number of accessories or sensors could be bolted onto the payload area. VideoRay, for example, allows for a wide variety of instruments and accessories to be added in the field, as required, by the end user. But even VideoRay users have had only one basic set of thrusters, power system, data transmission, and standard camera with which to work.

VideoRay engineers have developed the latest generation of underwater technology that allows any aspect of an ROV to be altered—the frame, power system, communication system, thrusters, cameras, manipulator, and lights—in addition to all the sensors and tools currently available as Pro 4 accessories. All of these modules work together through a standard connector so they can be mixed and matched as and where needed to a frame (that itself can be customized for a solution). Since each component is produced in quantity and used across a wide range of ROVs, the availability and cost are reduced and, more importantly, the reliability and performance are to the same high standard that VideoRay users expect.

When applying this approach to the task of cleaning and inspecting an FPSO for a UWILD, all of the requirements and constraints for an optimal solution can be considered:

• Cleaning Requirements – Each weld seam to be inspected must have bio growth completely and effectively removed to inspect the seam and coating.

• Maneuverability – Must be able to position the cleaning lance and hold it at the appropriate position and angle to find and follow a weld seam.

• Deployment – The ROV system must be able to be deployed over the side of the FPSO.

• Portability – Must be as light and small as possible so it can be maneuvered to and deployed from FPSO deck.

• Durability – Much more critical than normal as repairs are limited to module replacement or a similar task that can be done rapidly on site.

• Tether length – Medium; 150 m should allow for operation from any convenient location and still reach the entire hull.

• Cameras and documentation – Cameras are needed to observe the cavitation cleaning and inspection identified areas. All video should be recorded. Audio from the inspector and pilot are important to generating report documentation. Cameras should record high resolution for both video and stills.

• Lights are needed to illuminate the work area for cleaning and all inspection areas for stills and video. Mission Specialist is over the side, on deck is tether married to stiff high pressure hose for cavitation cleaning.

• Durability – One of the most vexing problems for the cavitation cleaner system is the need to harden it from the constant scouring it receives from marine debris that is propelled away from the hull by the cleaning action. Much of this consists of extremely hard shards of coral and the like. This kind of effluent can, in the space of a few hours, completely destroy fiberglass-reinforced Delrin props, for example. Tethers also take a severe beating.

• System portability and deployment – A unique aspect of the VideoRay approach is developing a system that can be safely operated and deployed from the platform instead of from another vessel. This is a significant advantage, allowing the cleaning and inspection to be performed in sea states where safety guidelines prohibit deployment from another vessel. And, of course, the expense of a support ship is eliminated.

While meeting these requirements, the vehicle needs to be deployable from available deck space on the FPSO. In addition, safety considerations for deck deployment and handling require the vehicle to be carried by one man with one hand, maintaining 3-point contact when on steps or when stepping over and around platform infrastructure.

This operation demonstrated an effective and efficient way to conduct FPSO inspections required by classification societies. Not only was the job done faster, with less damage, using the new system did not affect ongoing operations of the FPSO. The total cost was less than $300,000—less than 10% of the cost of the previous inspection that caused coating damage.

By using an ROV cleaning system specifically designed for this purpose and operators trained to use it, the process of conducting the inspection can be done more rapidly, easily, and at far less cost than by using existing techniques. While further developments are sure to make the process more effective, it has already demonstrated that it is the best practice for FPSO inspection.