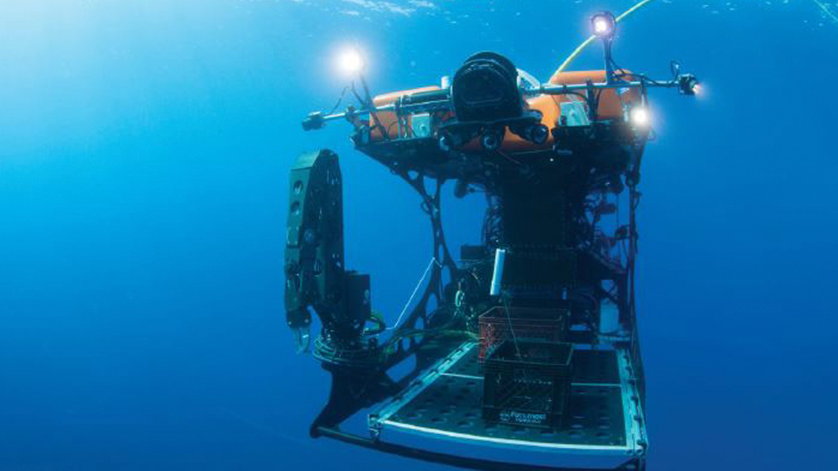 In August 2016, a new hybrid Remotely Operated Vehicle (ROV)/Autonomous Underwater Vehicle (AUV) robot from Woods Hole Oceanographic Institution (WHOI) was sea trialled in Panama to 2,500 m. The innovative design concepts being tested in the Nereid HT will have long-term implications for submarine robotics and control systems in diverse applications from science to oil and gas and the military. Nereid HT was developed for deep-sea scientific and filming missions, and WHOI is actively seeking partners who can apply these new technologies to a range of emerging applications.

Nereid is one of a long line of revolutionary submersibles designed and built at WHOI stretching back to the three-man Alvin vehicle developed in the 1960s. Its most recent antecedent is the Nereus—a full ocean depth capable vehicle that served the scientific community over 8 years before being lost in 2014. At the head of the WHOI team is Andy Bowen, inventor and lead engineer with over 30 years of experience in the field who explained, “Operating Nereus down to 11 km presented us with some serious engineering challenges, particularly with the ship-robot tether system. It had to be extremely lightweight and compact, otherwise shipside handling would have been both massive and very costly. Many of the technologies deployed first in Nereus have been further evolved and refined in Nereid, making it one of the most advanced and versatile unmanned submersibles in the world.” The compact, two tonne, battery-operated Nereid can store large amounts of rechargeable energy on board. It has a refined manipulator arm design coupled with a very efficient hydraulic power unit and highly effective propulsion, lighting, and control systems, says Bowen. Taken separately, these are all incremental advances in design, but when combined with the powerful software embedded in the Nereid HT are transformative.

Nereid has three distinct operating modes. The first is similar to a conventional ROV, linked to the ship by a reusable reduced diameter oceanographic cable - mode 1. The second is also a tethered mode but uses expendable optical fibre that allows travel up to 20 km from the host vessel - mode 2. This extreme horizontal mode is very unusual and can for example, allow operation under ice where the host vessel remains in icefree water. In the third operational mode Nereid is controlled through the optical ‘wireless’ link with no physical attachment to the ship - mode 3. In this mode Nereid can venture beyond the range of the wireless link using acoustic communications, operating autonomously. All three modes use new technology to extend the capabilities of the Nereid family of hybrid ROVs, blurring the line between remotely operated and truly autonomous vehicles.

The Dalio Foundation supported the vehicle development and, as part of its Dalio Ocean Initiative, also made the expeditionary vessel Alucia available. The Alucia—a 55-m, 1,396 tonne vessel, originally built in 1974 as a heavy lift ship and launch/recovery platform for diving and submersible operations, was extensively refitted between 2008 and 2012 for its current science and filming role. “What we are trying to do on board Alucia is to give the ship, and others like her, the capability to access depths that would be impossible for a ship of this type using conventional technology—we are aiming for 5,000 m using this novel, lightweight reusable umbilical system. It’s a much smaller diameter tether than would typically be used for ROVs of this size and capability,” said Bowen.

Most ships for deep-sea ROV operations require a dynamic positioning (DP) capability, allowing the vessel to hold a geostationary position above the ocean floor. This is needed to avoid putting undue stress on the umbilical cable running between the vessel and the robot. DP ship charters are costly and can be difficult to schedule, but Nereid’s unique tether design allows it to delink from the ship’s movements, freeing it from the need for a DP vessel. The Nereid is powered by rechargeable lithium ion batteries in a pressure-resistant custom casing designed by WHOI. The batteries give a 12-hour mission life, but the pace of change in battery technology improvement is now very rapid, going hand in hand with developments in electric car design. Bowen is confident that this will be less of a limiting factor going forward as greater amounts of power can be stored onboard the vehicle. “More on-board power could enable extension of the vehicle’s capabilities, eventually allowing it to take over some of the tasks normally reserved for heavy work-class ROVs, like cable laying or pipeline work,” said Bowen. Battery power also does away with the requirement for specialized, high-voltage power supplies on board the mother ship.

Research engineer Chris Taylor acted as the pilot for the sea trials in Panama: “The pilot interface has been built to make Nereid as accessible as possible to a wide range of potential pilots.” The software was written by WHOI’s own engineers. Ex-gamer Taylor says it is very easy to use. While providing the usual information for tethered operations, it also allows access to engineering data like motor controller status for the thrusters, battery statistics and status, hydraulic power systems and valves, and—importantly in a battery-powered vehicle—power management systems to monitor and manage overall power and active consumption.

“The thrusters are our number one power consumer on the vehicle,” says Taylor, “with lights and hydraulics being the next largest. We have optimised our hydraulic power unit to minimise power consumption when operating the manipulator arm, grippers, and related systems.” The arm is custom built by Kraft TeleRobotics to a WHOI design that was originally developed for the Nereus project, and has since been refined.

Exploring the deep ocean is fraught with difficulties due to the enormous pressures at depth and the fact that, until now, inwater transmissions were restricted to relatively low bandwidth acoustic communications. Nereid can transition between remote and autonomous control modes according to the communication systems available to the robot, ranging from low bandwidth acoustics to WHOI’s new optical modem or gigabyte ethernet connections provided by a physical connection through its tether. The modem is in the final stages of a U.S. patent application and provides operators with real-time control, including full motion video uplinks and direct downlink control of thrusters, manipulators, etc. The system allows total control over the vehicle off tether, and Panama was the first test of the modem for bi-directional communications.

“Wireless control range is limited to 100 m, beyond which acoustics takes over,” says optical engineer at WHOI Norman Farr. “But, until now, we’ve never had high bandwidth under the ocean, it was slow comms or no comms. Transmitting live high-resolution video to and from untethered vehicles has never been possible until now.” Virtual tethering via the modem opens up the possibility of entirely new mission types where global experts or remote engineers can tap into its live visual output feeds and participate and contribute remotely to expeditions or inspections without the need of a berth on a ship above site. As their abilities grow, smaller ROVs like the Nereid class are also increasingly being deployed by navies, coastguards, and ports around the world, including the U.S. Coast Guard, the U.S. Navy, and the Royal Navy. Hybrid ROV/AUV vehicles can be used for a huge variety of underwater tasks such as explosive ordnance disposal (EOD); meteorology; port security; mine countermeasures (MCM); oil and gas support; marine science and archaeology; and maritime intelligence, surveillance, and reconnaissance. The technologies deployed in the Nereid HT will also have far-reaching implications in the oceanographic science community as vehicles like it open up the deep ocean to more and more scientists as expedition and vessel costs fall.

As the vehicles become more capable and versatile, Bowen envisages a future where ship-less systems could prevail. “I can see a Nereid covering hundreds of kilometres under simple acoustic comms control, then at a work site linking to an optical modem, receiving instructions wirelessly, while working under the control of a human pilot. Or further ahead, actually residing on the seafloor, available to respond when needed, say to harvest data from an undersea observatory or provide timely intervention. The robot can then respond no matter what the sea conditions. Indeed, in locations like the high Arctic, ship-less intervention might be an imperative.”

Many airborne drones already operate like this, flying to their operations site under little or no human control. WHOI advances in underwater robotics, autonomy, and communications technology make it extremely likely that we will see these kinds of missions under the surface of the ocean before too long. Small but highly capable hybrid vehicles like Nereid could eventually be as common a vessel staple as the ship’s zodiac, ready to deploy at a moment’s notice.