In a world where everything needs to be “Huuuge” a philosophy has crept in over the last several decades that quality depends on how big the box is and how much you spent on it. Like a kid running to the biggest box under the Christmas tree or your teenager wanting that ever larger and pricier smart phone, it seems the size and cost of an object fascinates us. Some people are starting to realize that bigger is not always better. What you normally end up with is that depressing, freshly opened potato chip bag that is only half full and filled with air. This is an analogy that fits a lot of technology available today. You have a bright shiny big box that doesn’t exactly do what you thought it was going to do, but you deal with it because you conned your purchasing department into spending big on what turned out to be mostly hot air. 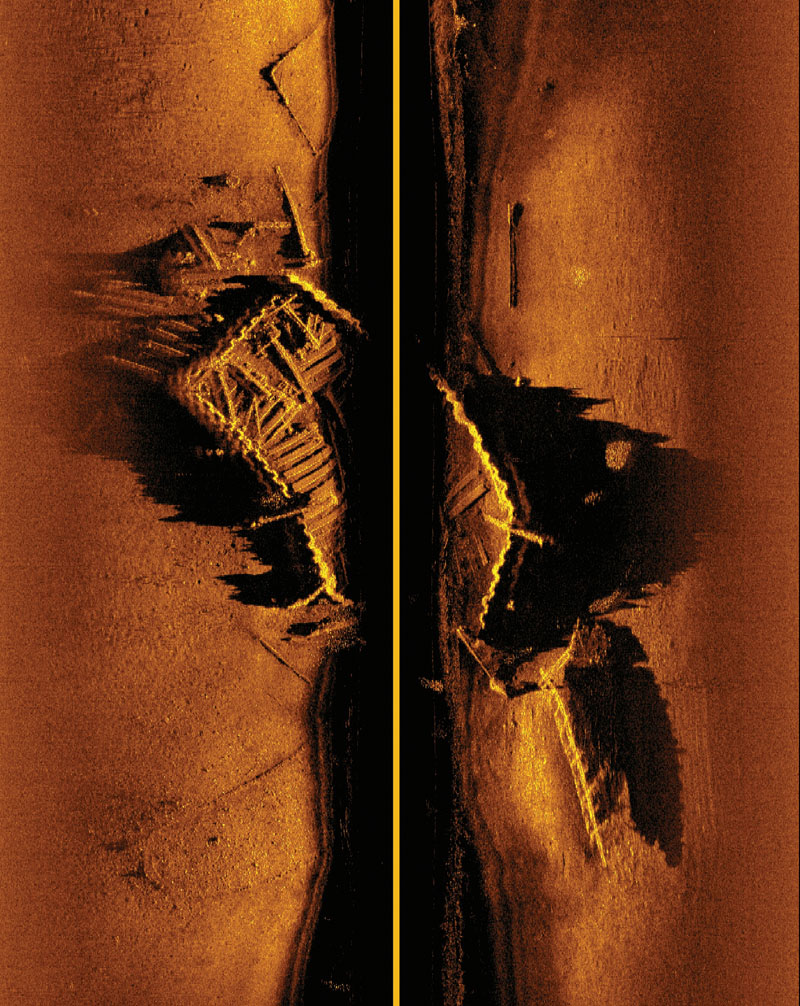 On the bright side, not all technology companies fit this bill. One in particular is taking a different approach when it comes to embedded side-scan sonar. Marine Sonic Technology (MST), a brand of Atlas North America, has dropped the term “Big Box” from its vocabulary. With revolutionary breakthroughs in technology, MST’s engineers have developed the smallest and one of the most powerful embedded side-scan sonars available on the underwater imaging market.

It started a few years ago when Alex Berelovich, chief engineer at MST, set his goals on updating the aging SSPC analog embedded system, which was the market standard and a staple for many commonly used AUVs used in military to oceanic survey operations. He spoke with several of his customers who expressed the challenge of accommodating ever increasing payload dependencies. On-board payload space comes at an extremely high premium as various sensors and control systems compete for a very limited space—and having demands of a limited, finite power supply. His challenge was set: create the smallest and least power consuming embedded side-scan sonar available without any degradation in quality. If that wasn’t enough, he wanted to include the new advancements in Compressed High Intensity Radar Pulse (CHIRP) and Embedded Processing, also.

Common embedded side-scan sonars of that time were large—that time being the not too long ago year of 2012. The average size of the internal electronics was between 16 to 20 in. with exterior transducers reaching upwards of 22 to 25 in. That wasn’t bad in that era. AUVs were big, even “HUUUGE,” if you don’t mind the pun. They also consumed massive amounts of power. Between the electronics and the transducers, you could easy eat up 30 to 45 watts or more of power. This greatly impacts AUV endurance. 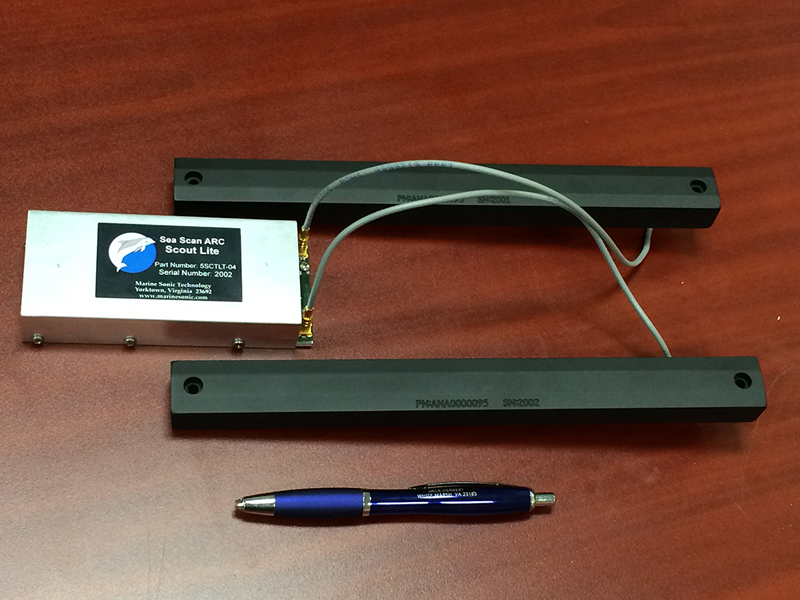 However, today’s AUVs and UUVs are getting smaller—much smaller! With the recent introduction of the new, highly versatile Micro AUVs, the typical embedded side-scans would never fit. This creates a paradox for the Micro AUVs. How do we build small if the sensors we need won’t fit? The new missions these little guys are going on require them to be small, some even incredibly small. They will be used in situations never thought of for use with AUVs in the past, such as extremely remote areas where they will have to be brought in by backpack, in pipelines, and police and fire agencies for victim and evidence recovery in small lakes and tributaries. They will be adapted with smart technology to locate and then neutralize naval mines in contested waters, and even used with hive and swarm technology where multiple AUVs will collectively work together to conquer all kinds of tasks.

Yet all of this will come at a price. Not a financial one, but a cost in available, already highly limited payload space. Most current sensors just won’t fit, not to mention the power draw. This was the problem that had to be solved and the technology just wasn’t there.

In 2013, MST introduced the ARC Scout side-scan sonar for AUVs. The Scout was based on a new, highly secretive technology called ARC or Adaptive Resolution CHIRP. It incorporated superior front-end filtering, embedded processing, and an innovative transducer design. The Scout was able to accomplish something no other embedded side-scan was able to do: conquer the size and power barrier. It became the smallest, most compact, yet extremely powerful system to date. Measuring 3.9 x 3.7 x 2.2 in. and weighing in at only 1.6 pounds, this ultra-high resolution, dual simultaneous frequency CHIRP system is capable of drawing a maximum of 18 watts of power. In the variable power mode during normal operations it would only draw between 9 and 12 watts. This performance put it light years ahead of its cumbersome counterparts.

“However, this was not the end, nor was it the beginning of the end, it was only the end of the beginning...” to quote Sir Winston Churchill. Berelovich and his team of engineers still felt they had more work to do. The Scout just wasn’t small enough for future AUV applications, so they took the lessons they learned and spent the next 2 years refining it, making it better, stronger, faster like Steve Austin without the six million dollar price tag.

In early 2015, MST began with a prototype unit affectionately called the ARC Scout Lite. It was going to be a single frequency version of the ARC Scout, but by the time it is was complete the Scout Lite was overwhelmingly better engineered, more technologically advanced, and far less expensive than the Scout. The Scout Lite measured only 5.02 x 2.32 x 0.9 in., weighed a mere 0.386 lbs., and power consumption ranged from 1.5 watts in sleep mode to a max of 9 watts using 28VDC. Inputs of voltage are 12VDC-4w, 18VDC-5w, 20VDC-6w, 24VDC-7w, 28VDC-9w, and 30VDC-8w.

There are currently four available frequencies, with more to come. The new innovative transducer design is rated between 200 and 1,000 m and is made from PVC and stainless steel. What’s inside that makes the magic happen is still a closely guarded secret. The currently available frequencies and ranges are 600 kHz @ 130 m, 900 kHz @ 80 m, 1,200 kHz @ 45m, and 1,800 kHz at 25m. A 300 kHz is now available, with possibly lower and even higher frequencies to come within the next year or so.

That brings us to spring of 2016. MST is now proud to introduce the ARC Scout MKII. In pursuit of constant improvement, MST took the best of both worlds and created a dual frequency Scout with the size and technological advancement of the Scout Lite.

The Scout MKII is a modular, expandable, adaptive CHIRP side-scan sonar system that can fit in the smallest of AUVs with embedded processing and superior front-end filtering using highly integrated circuitry. You can use just one sonar module for single frequency applications or link multiple modules together, giving it dual, triple, or even quadruple simultaneous frequency transmit capability.

The future of embedded side-scan sonar is now. The Scout MKII is the next evolutionary leap in technological advancement. It’s the smallest, lightest, fastest, and, quite possibly, the least expensive side-scan sonar on the market. Its design gives AUVs precious payload space while still rendering the most beautiful images of up to 0.4 cm of resolution!

If you are interested in reclaiming that much needed payload space and reducing your power consumption please let MST show you how you can do it, without breaking the bank. For more information on the ARC Scout MKII please contact Marine Sonic Technology at MarineSonic.com or the old fashioned way by calling 1-804-693-9602. Marine Sonic Technology is a brand of Atlas North America.