HUGIN AUV – versatility at its core

The Kongsberg Maritime HUGIN AUV System is renowned as the most successful and capable commercial AUV available today. It has seen operations with survey companies and navies around the world, covering more than 700,000 line kilometres of contracted commercial survey. HUGIN is a highly versatile vehicle used for diverse applications and Kongsberg Maritime’s permanent Research and Development team is always working on new vehicle behaviours and capabilities to meet customer requirements.

New applications
A recent new application for HUGIN is pipeline survey. Today, external pipeline inspection is often performed with towed or Remotely Operated Vehicles (ROVs). However, Kongsberg Maritime has developed a solution for pipeline inspection using HUGIN. The primary advantage of using an AUV for this task is that it can operate at substantially higher speed – typically 4-5 knots, compared to 1-2 knots for a ROV. HUGIN can also operate without being followed closely by a large surface vessel and its stability means that it can effectively collect more advanced types of sensor data, such as Synthetic Aperture Sonar (SAS) range independent, high resolution imagery. One major strength with HUGIN is the advanced payload control system enabling simultaneous operation of all sensors. This enables HUGIN to collect imagery, bathymetry, still pictures and chemical sniffer data simultaneously while surveying 3-10 meters above the pipeline. 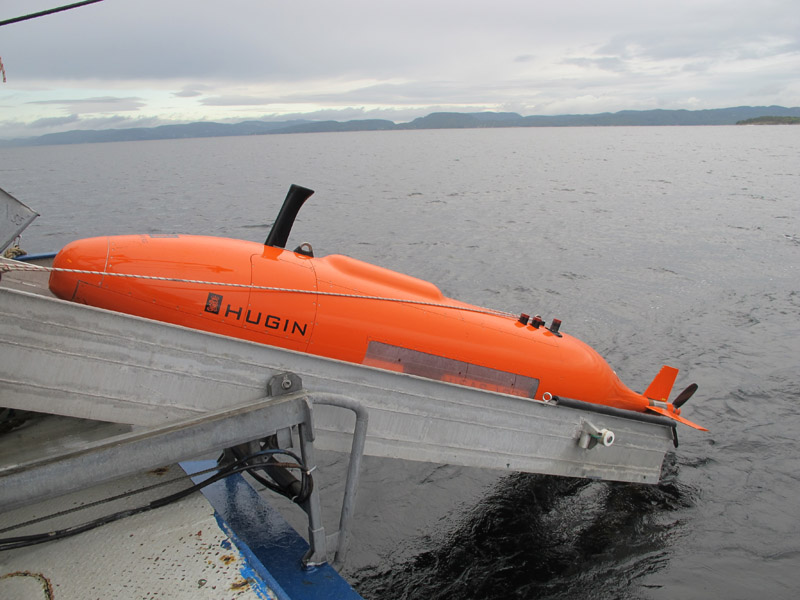 These capabilities extend from a joint project with the Norwegian Defence Research Establishment (FFI), where Kongsberg Maritime developed advanced algorithms for robust detection, tracking and following of underwater pipelines and cables using HUGIN. FFI leveraged 15 years of experience in sonar data analysis developed for other applications such as automated target recognition (ATR) in mine countermeasure applications as part of the project and trackers have been developed for side scan or SAS imagery, and for bathymetry.

Protecting ships
When equipped with HISAS and automated target recognition software, the HUGIN system is perhaps the most capable AUV in the world and when configured this way, is a vital tool for naval mine hunting. During a single mission it can detect, process and classify mine-like objects in near real-time. This information is then fed into the mission controller to re-plan the route to collect photographs, thereby formally identifying the targets with no user input.

Many commercial operators demand an even more comprehensive sensor suite than military users. However, there are common elements required by both market segments, notably reliability, robustness and support, which Kongsberg Maritime continues to deliver; reflected in the recent testing of a new cNODE integrated subsea positioning and communication system on HUGIN. During the testing of this innovative new package in the deep waters outside the coast of Bali, Indonesia, and the Indian Ocean, HUGIN reached a record operational depth of 4449 metres (HUGIN is rated to 4500 metres).

Ongoing development
HUGIN has until now been delivered with three separate acoustic systems; a beacon transponder for positioning, an Acoustic Data Link (uplink) and an Acoustic Command Link. The new cNODE system now replaces all three with a single embedded system featuring the established HiPAP 501 acoustic positioning system. By removing the need for a towed transducer for communication purposes, the single topside HiPAP system increases the efficiency of launch and recovery of the AUV, and allows for greater agility of the surface vessel. During the testing, the new record water depth was achieved not only for the AUV, but also for the cNODE system. Throughout the deep water dives, cNODE provided a reliable and high quality data link to the AUV, enabling it to carry out its survey of a large seabed area.

This new positioning package is just one of the developments made for HUGIN over the past 20 years. In addition to developing for current market requirements, the HUGIN team at Kongsberg Maritime also works on future technology and capabilities that the market has not yet identified. The next generation of vehicles and applications is always being dreamt of, along with new levels of autonomy to take AUVs where they have never been before.