Addressing MDA Challenges with USVs as a Sensor Network

Daily we hear of the increasing threats to the world’s coastlines whether it’s illegal drug or human trafficking, smuggling of natural resources and fish, and/or new acts of terrorism on critical infrastructures and shorelines. The world’s navies, homeland defense organizations, and coast guards are tirelessly working to thwart these challenges, yet are doing so with limited resources (people, ships and patrol craft) due to reduced budgets. The costs are great if gaps in coastal protection allow illegal activities. For example, last year in Kenya, their entire country’s tourism collapsed after a round of violence in a coastal region caused travel warnings for “possible attacks on maritime vessels in or near Kenya ports”1. What’s the solution to provide affordable coverage for global maritime domain awareness? Let’s explore how fleets of unmanned surface vehicles can help address these challenges. 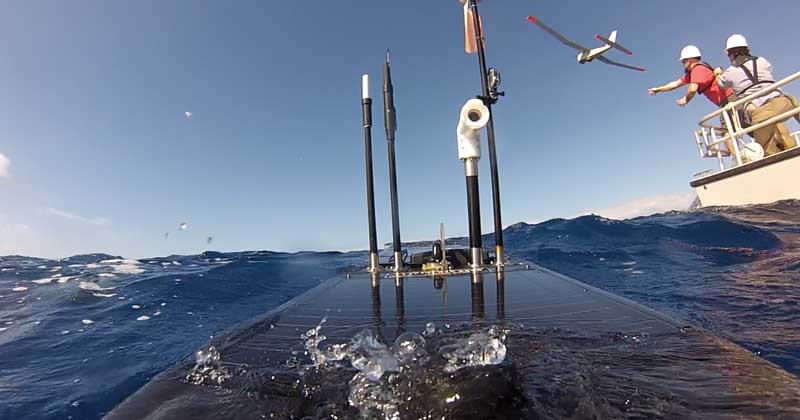 Maritime Domain Awareness
The International Maritime Organization (IMO) defines Maritime Domain Awareness or MDA as "the effective understanding of anything associated with the maritime domain that could impact the security, safety, economy, or environment." This spans securing borders, coastlines, and Exclusive Economic Zones on one hand and deterring exploitation of Marine Protected Areas (MPAs) on the other. The following gives a sense of scale of the global maritime operations (Frost & Sullivan, 2012):

While the overall economic activity in the oceans have been steadily increasing over the years, the responsibility to protect this high activity from illegal threats lies in the hands of government and state entities with limited budgets. Here are some numbers that highlight how expensive these threats have become with time (Frost & Sullivan, 2012):

Therefore, primary MDA goals are to get a good understanding of vessels as potential threats to national security and economic activity, and to get information on specific threats as early and as far offshore as possible.

Challenges with Current Capabilities
Whether it is to secure borders or protect MPAs, the capabilities that are utilized today are very similar—patrol ships, fixed buoys, and surveillance assets (planes, drones, and satellites). Let us evaluate each of these.

Patrol Ships: Though these vessels can be equipped with sophisticated, long-range sensors for detection, it requires manned missions out on the sea, which are limited by weather. Moreover, with multiple uses of these assets, it is typically patrolling (on-station) for a small fraction of the time.

Fixed/Moored Buoys: Buoys are a great way to gather ocean data, but their fixed location and high profile makes them easy to avoid. In addition to limited functionality and almost no re-tasking capability, deployment and maintenance of these assets is expensive while only achieving 60% to 80% availability.

Surveillance Assets (planes and satellites): These assets provide wide area surveillance and cover a larger area when deployed. However, the at-station time is limited and severe weather or cloud cover restricts the ability to continue the surveillance mission.

Many countries are just not resourced to provide coverage over the vast expanses of the ocean despite the damage to their economy by overfishing, smuggling, or other unauthorized activities. To achieve comprehensive MDA for all nations, the overarching limitation has been to gather affordable, persistent, pervasive, multi-sensor data for the detection, identification, and tracking of uncooperative maritime targets operating in territorial waters.

Autonomous Sensor Networks
One approach to address these gaps is to deploy sensor networks that augment our understanding of the activities going on in deep seas without sending manned assets for extended periods of patrolling, or worse, in dangerous environments. This isn't entirely new as sensors have been extensively used in different applications in defense, science, and commercial maritime industries attached to offshore fixed assets (rigs, buoys, and wind farms) or on-board moving assets (ships and aircrafts).

Figure 1 conceptually describes such a sensor ecosystem. Ideally, these sensors could be deployed on mobile platforms rather than fixed buoys for monitoring activities so that the system is adaptable to changing behaviors and traffic patterns of uncooperative elements. Data on any unusual activity in the area can be sent back to shore in real-time and other assets can be sent out to further examine the situation. Depending on the intent and confirmation of the threat, interdiction assets can be mobilized.

The big question is whether such an autonomous, unmanned, mobile platform can be built with flexibility of sensor payloads to improve the current operations. 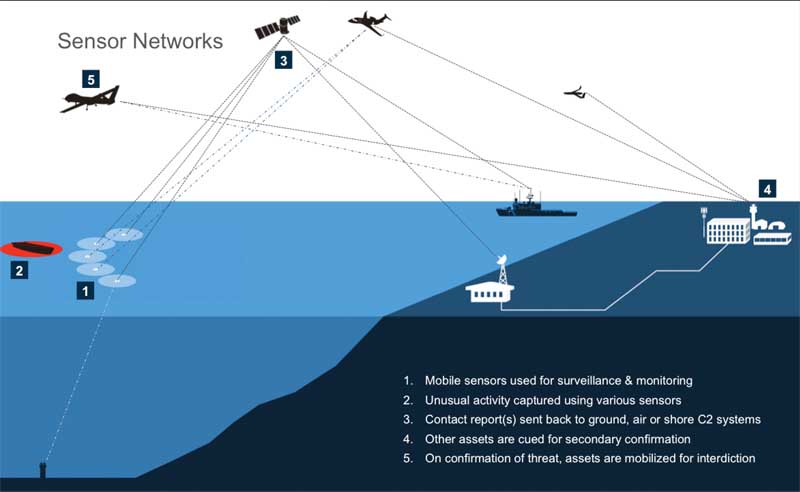 Answer: Unmanned Vehicles
For the past few decades, unmanned vehicles have been deployed serving both serious mission-critical tactical missions and leisure applications for DIY communities and robotics fans. Thanks to advancements in consumer electronics and demand, sensors have been driven to smaller size and lower costs. The combination of these two technologies has been fueling innovation at a phenomenal pace. Unmanned vehicles have also reached the oceans, opening doors to disrupting numerous applications that were otherwise considered impossible or cost prohibitive.

The timing is right for taking new and/or traditional sensor packages such as cameras, electro-optical (EO), RADAR, Auto-Identification System (AIS), acoustics, Radio Frequency/ Direction Finding (RF/DF), and integrating them on an autonomous platform. This would enable gathering of data for addressing MDA objectives.

One company helping to advance maritime domain awareness is Liquid Robotics. Through the innovation of the Wave Glider, the world’s first wave-powered ocean robot or unmanned surface vehicle, these unmanned platforms can patrol vast stretches of coastlines, night/day, 24x7, through the most severe weather conditions while requiring no fuel or personnel. They can be deployed with sensor payloads to acoustically detect unknown vessels and communicate information in real time, providing a persistent tipping and queuing capability to high-value, manned assets for interdiction. With the unique capability of interoperating in real time with manned and unmanned assets from the seafloor to the space, the Wave Glider provides a new capability to help address the MDA security challenge.

Figure 2 describes four operational scenarios where groups of sensors such as a fleet of Wave Gliders can work in formations to meet different MDA objectives:

The deployment of Wave Glider fleet offers flexibility in both position and re-tasking capabilities connecting manned and unmanned assets to build an “information exchange” network.

A recent example of a mission that connected manned and unmanned assets for real-time maritime domain awareness was done by NOAA’s Office of National Marine Sanctuaries, Liquid Robotics, and AeroEnvironment (visit www.sanctuaries.noaa.gov/news/press/hawaii-uas/welcome.html). Together, they successfully demonstrated the use of two unmanned systems, the Wave Glider from Liquid Robotics and the PUMA from AeroEnvironment, working in concert to identify an illegal surface vessel, verify its identity via aerial drone, and communicate to the command center. This is an excellent demonstration of how unmanned technology can work together to help alleviate the operational burdens of coastal patrol and surveillance. 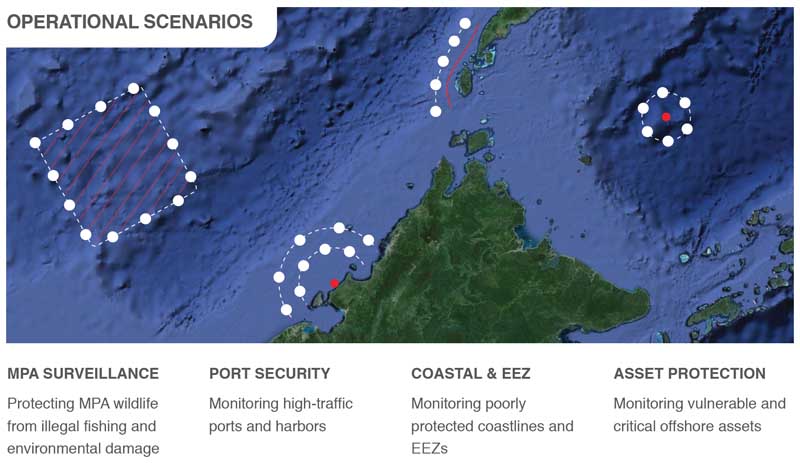 Figure 2. A list of MDA objectives and high-level operational scenarios where sensor networks (or Wave Glider fleets) can be deployed.

This unmanned platform can host a variety of sensors to improve threat detections both in quality and timeliness. Also, its ability to re-configure formations or adjust to varying traffic patterns makes it a great choice for dynamic wide area coverage. Compared to running deep-sea manned missions for monitoring and patrol, such a system incurs lower surveillance costs. Not only does this positively impact operating costs, it also improves effectiveness of existing assets—vessels or aircrafts that are usually patrolling the area can now spend more time on secondary confirmation or focus on interdiction.

It is important to understand that neither traditional surveillance approaches nor unmanned platforms can fully address today's MDA needs. However, when the two are combined to operate effectively, it creates an important multiplier effect.

Peek into the Future
If one takes a walk down memory lane for Unmanned Aerial Vehicles (UAVs), one would understand the long, tedious development path that UAVs have been on to mature technology, improve operations, get to scale, and eventually cross the chasm to be a mainstream asset. Despite challenges along the way, it was the sheer commitment of defense agencies to drive those programs that could avoid putting trained personnel in harm’s way.

For unmanned platforms in maritime applications one can expect a similar path of sensor innovation—operationalizing these assets and eventually get wider adoption to dramatically improve MDA around the world.

Pushing the Frontier
It is no surprise that it is very important for nations across the board to address gaps in MDA, some of which pose meaningful challenges. The recent developments in unmanned system technology holds great promise to extend the current maritime monitoring capabilities into deep and remote parts of the ocean. Hopefully, it builds a communication bridge between seafloor and space so that relevant, high-quality data can flow in a timely fashion to enable informed decisions and prevent potential threats to meet national economic and security goals.