Galvanic Corrosion in the Ocean Environment

One of the most common, yet easily preventable, sources of corrosion in the marine environment comes from fastening two different (dissimilar) materials into direct contact with each other then immersing them in seawater. There are ways around this problem, however.

Materials are tested for their galvanic potential against a standard reference electrode, typically Ag/AgCl or Hg/HgSO4. The result is a list of relative electro potentials, the galvanic series, ranking materials by their positive or negative voltages. The more positive voltages are the more noble materials, such as titanium and gold, and are less likely to corrode. The more negative voltages indicate the more active materials, the ones most likely to corrode, such as zinc, aluminum, and magnesium. The more noble materials are considered cathodic, hence the term “Cathodic Protection.” The more reactive materials are considered anodic, leading to the term “Sacrificial Anode.” 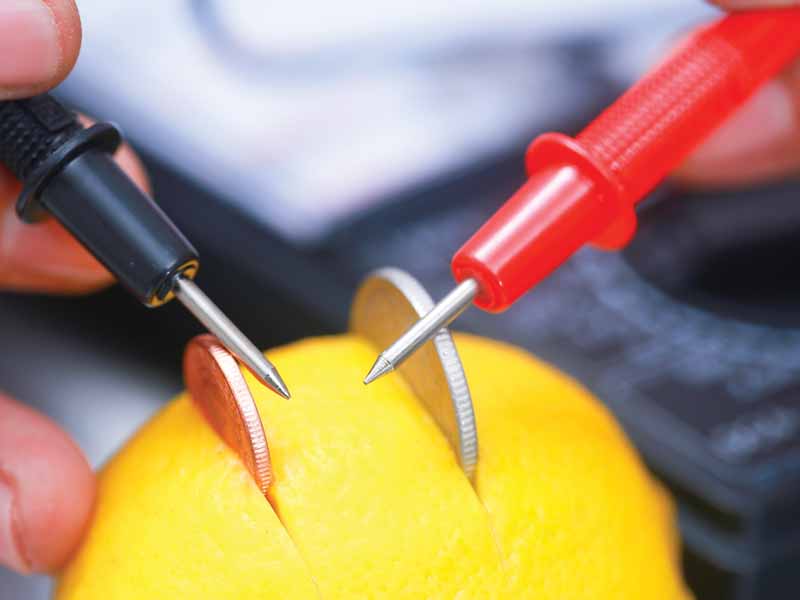 A galvanic or voltaic cell starts with two dissimilar materials in an electrolyte. Connect the two metals with a wire to make a circuit, and corrosion of the anode begins (Photo courtesy of WikiHow).

As always, there are caveats. Some materials, such as stainless steels, appear twice on the galvanic series. This is a result of a surface conversion process called “passivation,” where the reactivity of the surface is reduced and the part moves towards the noble end of the scale.

It takes four things to make a simple galvanic or voltaic cell:

It’s a powerful insight that whatever serves as the ion path (#3), say saltwater, cannot also act as the electron path (#4). Those functions must be done by different means. So designers can prevent galvanic corrosion by either electrically isolating the two metals with a dielectric, such as delrin, or removing the object from contact with seawater.

The first option results in an assembly that is mechanically connected, but electrically isolated. This is the preferred method.

Removing the object from contact with seawater sounds counterintuitive at first: we design machines to go into seawater. This approach argues for an inert surface coating, such as a good marine paint system, anodize, or even oil immersion, such as a structure inside a PBOF case. 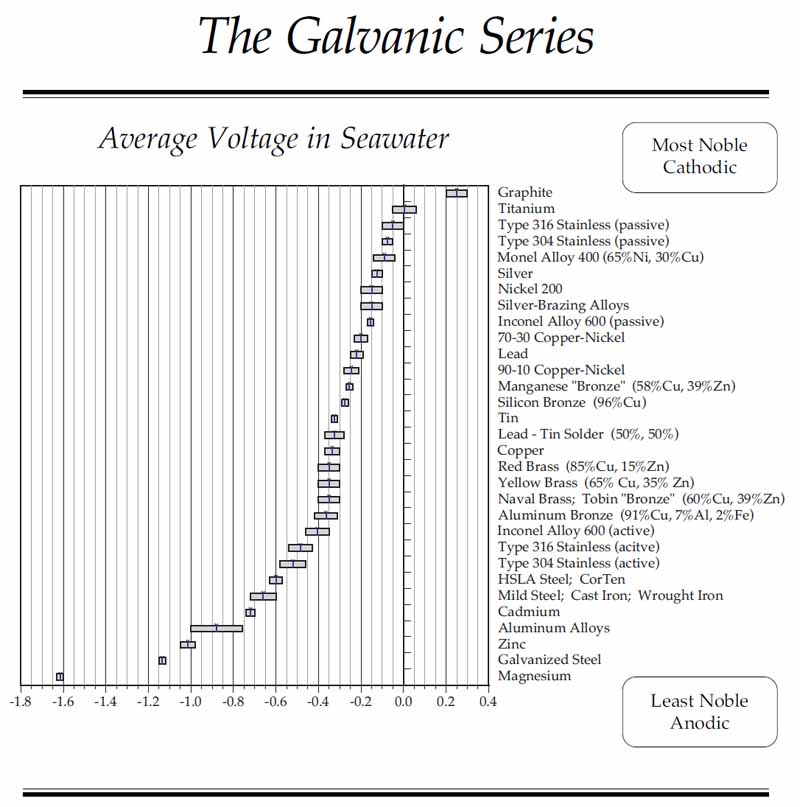 The galvanic series in flowing seawater. Stagnant seawater becomes anaerobic, and the reduction of oxygen changes the potentials (Graphic courtesy of Kasten Marine).

Some designers have argued that anodize is a good insulator, and they’d be right if the anodizing were a continuous and perfect surface. That’s often not the case, however. Anodizing is a surface conversion process of a few thousandths of an inch thickness, and the build up of anodize occurs at right angles to the plane of the surface. Thus, an anodized part design that includes sharp angled features, such as threads or right angle corners, will be compromised from the start. (See “OE 101: Anodizing Aluminum for Underwater Applications,” ONT, April/May 2009, pp 54-56). Anodizing aluminum creates a thin shell of aluminum oxide, a brittle ceramic, over the original softer base material. It’s like a knight’s armor. This thin shell can also crack when the softer substrate yields and the surface cannot, such as from an impact or flexure in the field. A small chip results in an cathode-anode ratio that concentrates corrosion at the small exposed spot, accelerating corrosion at the exposed point. Not always unwelcome, designers can creatively employ this for release mechanisms or scuttling plugs. 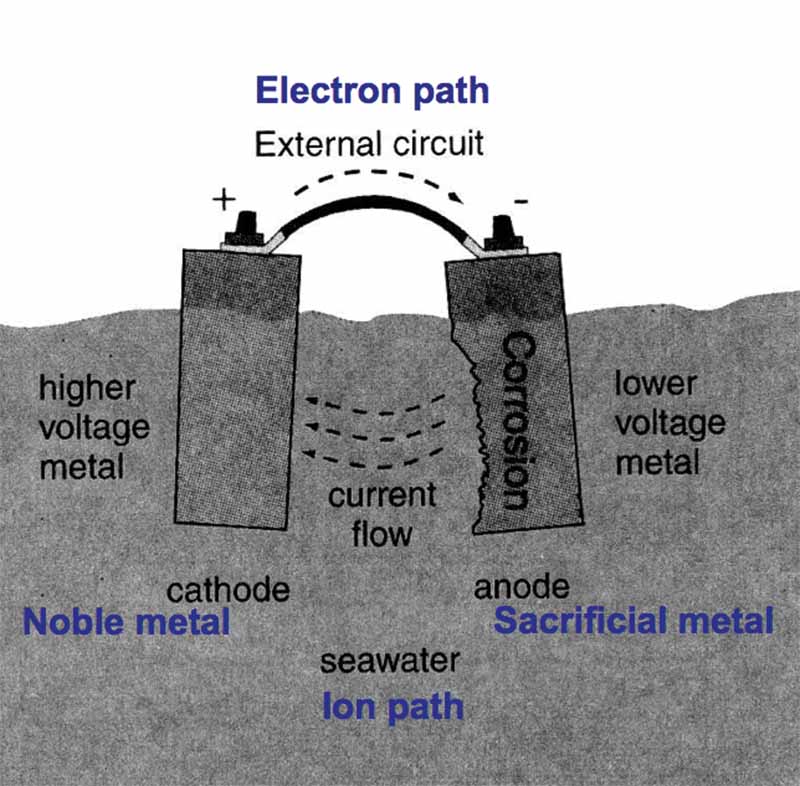 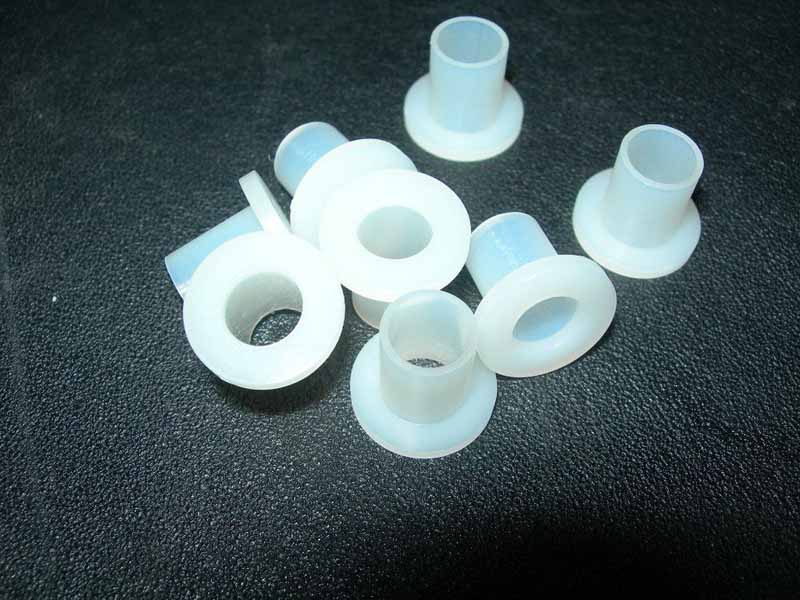 A plastic shoulder washer may be used to isolate a stainless steel fastener assembly from an aluminum frame.

With the increasing use of carbon fiber composites, designers will do well to note the placement of graphite on the chart at the high end of the noble scale. Dissimilar material isolation will be a critical element of a successful design.

Another special case is the use of lead ballast. Lead has a place on the galvanic series that must be considered when attaching it to a frame.

Welding two or more pieces of metal together can create material differences in the assembly. Welding is essentially a casting process that joins two or more wrought parent materials. The welded zone may have chemical dissimilarities to the parent materials, creating a galvanic cell.

Selection of an underwater bulkhead connector may be limited, and force a dissimilar material combination. This can also force a related problem known as Cathodic Delamination of an elastomer from the base material, as may be found with an overmolded boot.

If there is no way around joining two dissimilar metals together, such as the weldment described above, three options may be considered. First, make the exposed area of the more reactive metal significantly larger than the noble metal, skewing the anode-cathode ratio to where the corrosion will be dispersed over a larger area and slow the rate of corrosion at any one point. Thus, counterintuitively, if you feel you have to paint something, paint the noble metal. Secondly, the use of a third, more reactive metal will strategically force corrosion to occur where it does not matter. Zinc anodes are a good example of this approach. (Designers should note that anode grade zinc is a different alloy than the pure zinc used in cast spelter sockets.) Third, an imposed electrical current may be used to reverse the electropotential of two materials.

Underwater housings may also be made of inert materials, including glass, plastic, ceramics, even concrete. This eliminates one side of the galvanic cell.