Delta Marine’s Voe Earl working off the Port of Pra Voltri, for the Costa Concordia Salvage

With dismantling of the ill-fated cruise ship Costa Concordia now well underway at the Port of Pra Voltri, Genoa in Italy, there is time for further reflection upon the extraordinary salvage operation that followed her sinking in January 2012. 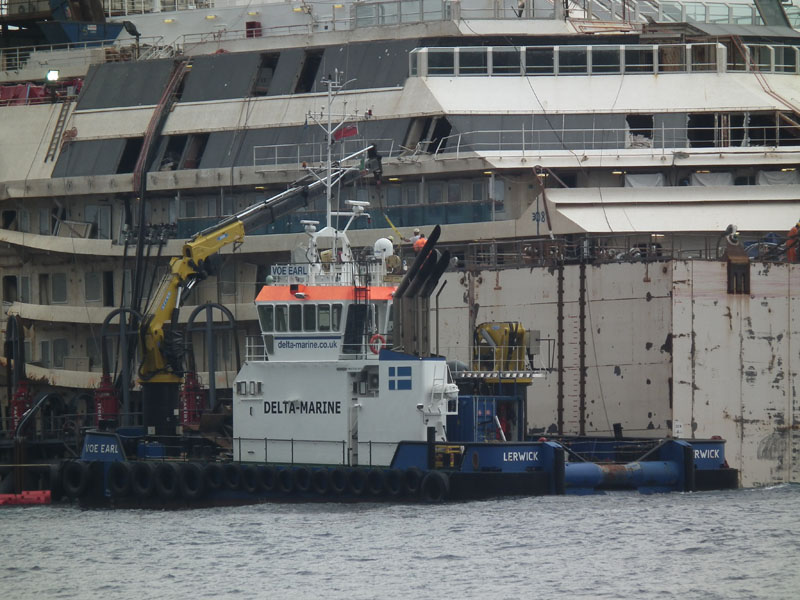 Three months later a salvage contract was awarded to a joint venture consisting of Titan Salvage and Micoperi. Work began securing the vessel, constructing a support platform upon which to right it, and attaching buoyancy caissons to the out of the water port side.

Various workboat operators were subcontracted to work on the complex $1.2bn salvage of Costa Concordia, including UK based Dalby Offshore, which had recently observed Shetland based Delta Marine’s Damen Multicat 2613 Voe Earl performing ship to ship transfer works in Great Yarmouth. Dalby chartered the vessel and Voe Earl arrived at the island of Giglio in August 2012, initially to provide rapid evacuation of plant away from the work site should there be sudden changes of weather as well as general marine assistance.

However, what Dalby and Delta Marine already knew, that Voe Earl was equipped to make a much broader contribution than simply providing emergency support, was quickly noticed by the salvage specialists on site, the majority of whom had never worked with a Multicat before.

No sooner had Voe Earl arrived on site than she was laying anchors and helping to position cables which would secure Costa Concordia on the sloping ledge where she lay and prevent the wreck from sliding into deeper waters.

The work site was crowded with vessels and there was no lay down area for storage in the tiny harbour at Giglio, with jack-ups being used to store plant and those jack-ups being serviced by crane barges. So the arrival of Voe Earl also quickly reduced unnecessary barge traffic as she was able to transport plant direct from the mainland to jack-ups and fabricated assemblies directly to the crane barges. She assisted cargo barges into position for arriving underwater platform components to be lifted by M30, the largest crane barge on site. Voe Earl also assisted the accommodation support vessel (ASV) Pioneer and numerous other supply vessels. 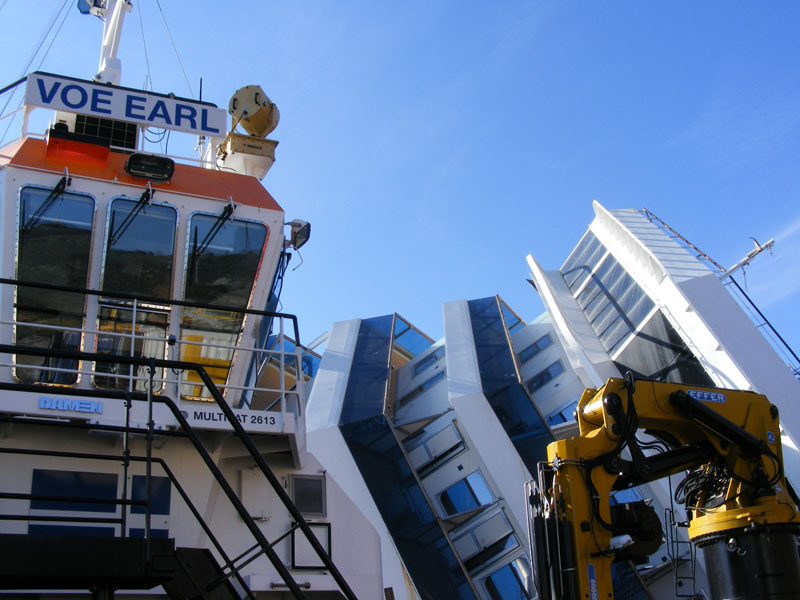 “Voe Earl was like a bumblebee,” said Delta Marine’s operations manager Neil Spanswick, “You should see its AIS track, it was flying all over the site. Clients were changing work schedules based on what Voe Earl could do.”

On site logistics proved to be the vessel’s bread and butter but among those additional activities were provision of harsh weather ferry services for site personnel, numerous dive support activities, and even a bit of direct salvage work using Voe Earl’s 100t anchor handling winch to help remove Costa Concordia’s 65 tonne rudders whilst manoeuvring beneath the wreck’s overhang, which was denying access to crane barges.

By the end of 2012 it was deemed necessary to charter another Multicat from the Delta Marine fleet. Voe Venture arrived on 21 January 2013 and spent that entire year on site before proceeding onwards to South Africa to participate in the salvage of the grounded and broken bulk carrier MV Smart.

Prior to float off of the Costa Concordia, Voe Earl rescued the tug Aran, which had suffered engine failure during gales just off Giglio harbour and had to be towed to a sheltered area on the north of the island. 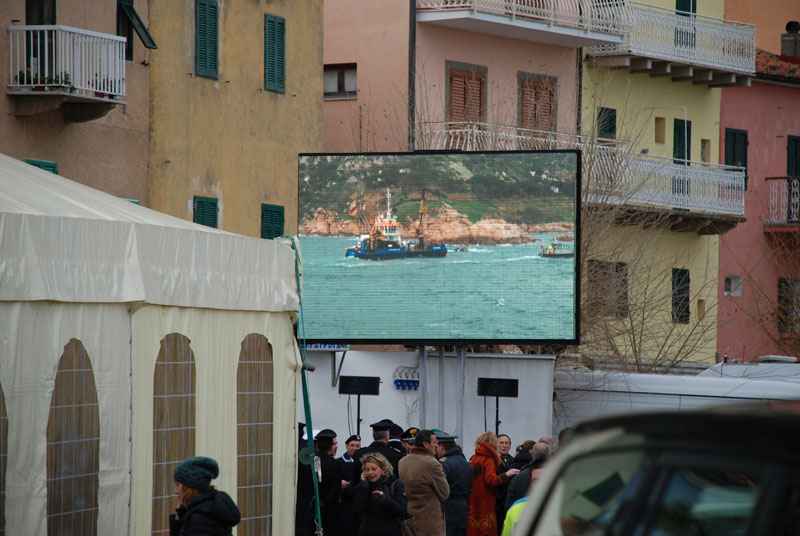 Voe Earl continued working on the Costa Concordia salvage until November 2014, by which time the wreck was parbuckled, prepared for towage and escorted to Genoa by a fleet of workboats which included Voe Earl.

During the float off Voe Earl had assisted in laying two sets of piggy backed anchors connected to the stern of the wreck which held it in place until pulled by tugs around to the east for final departure. Voe Earl then disconnected the hold-back anchors and followed the tow with an oil pollution kit on board in the event of spills. A noxious gas sensor was mounted on the wheelhouse as well as an infra-red camera to monitor the wreck and personnel onboard the wreck during the tow.

The float off and tow to Genoa was undertaken in July 2014 but Voe Earl remained chartered and on site until November as the post-departure site clean-up and general demobilisation of the world’s largest ever salvage operation continued.

By project’s end Voe Earl and Voe Venture had achieved much more than merely contributing to a successful operation. They had shown the salvage world the scale and range of contribution which vessels such as Delta Marine’s Multicats were capable of making.

Their involvement in the Costa Concordia salvage operation also inputs to future workboat design, the initial manifestation of which will be the first of class Damen Renewables Service Vessel (RSV) 3315 which Delta Marine has been developing in cooperation with the Damen Shipyards Group over the past two years. Although developed specifically for the marine renewable energy sector, when the first RSV 3315 is launched early in 2017 it will have just a bit of salvage experience pulsing in its veins.