The article "Flying Leads: The How," previously published in the March 2014 issue of Ocean News & Technology detailed the "deployment, handling, and mating via specific tools and methods" of single and bundled conduits (1). The intent of this follow up article is to emphasize the manner by which weather conditions affect the management and installation of single and bundled conduits; illustrate the role that topside cranes play in regard to their handling; and, above all, to have this article serve as a field/reference guide for existing and future offshore personnel. 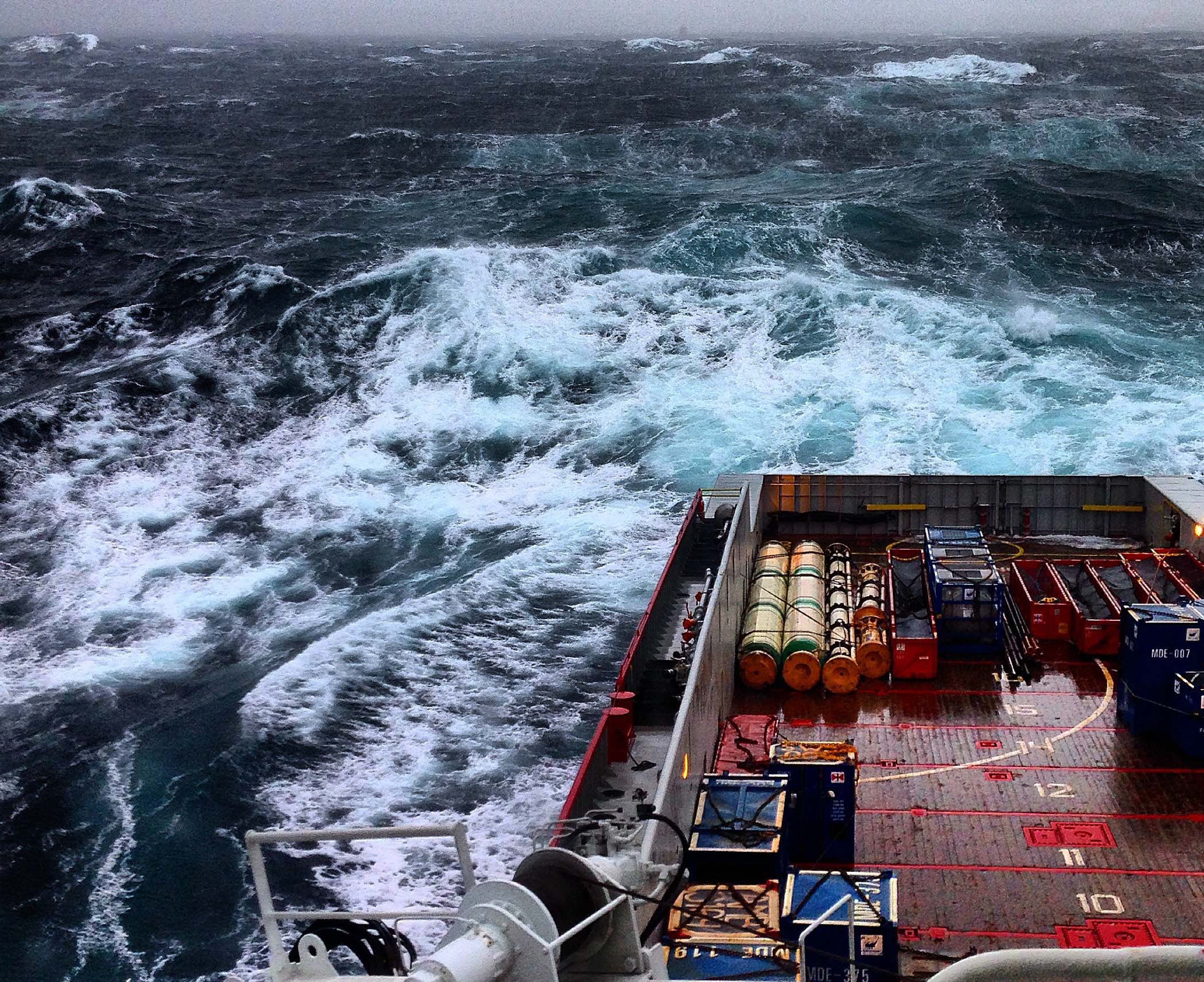 A vessel operating during rough seas in the North Sea (Source: Steffen Nerhus).

Single Conduits in Operation
From an installation and handling standpoint, there are two commonly used methods by which to trip a single conduit via their respective deployment source to operational depth (see Table 1). Once a single conduit has reached its operational depth, it can then be installed, allowing for a path of continuity to be bridged between two assets in open water. The following definition for single conduits, as set forth per Reaching Ultra (1)—will be referenced in order to give the reader a better understanding of their composition and application:

When electrical and/or fiber optic lines are run in a single conduit Flying Lead, Pressure Balanced Oil Filled (PBOF) hoses are required, giving way to Electric, Optical, and Electrical Optical (Hybrid) Flying Leads (EFL, OFL, EOFL, respectively). A key feature of PBOF hoses is that all lines are housed within a single hose, making it the sole protective barrier for these lines...via its Kevlar properties, for example. 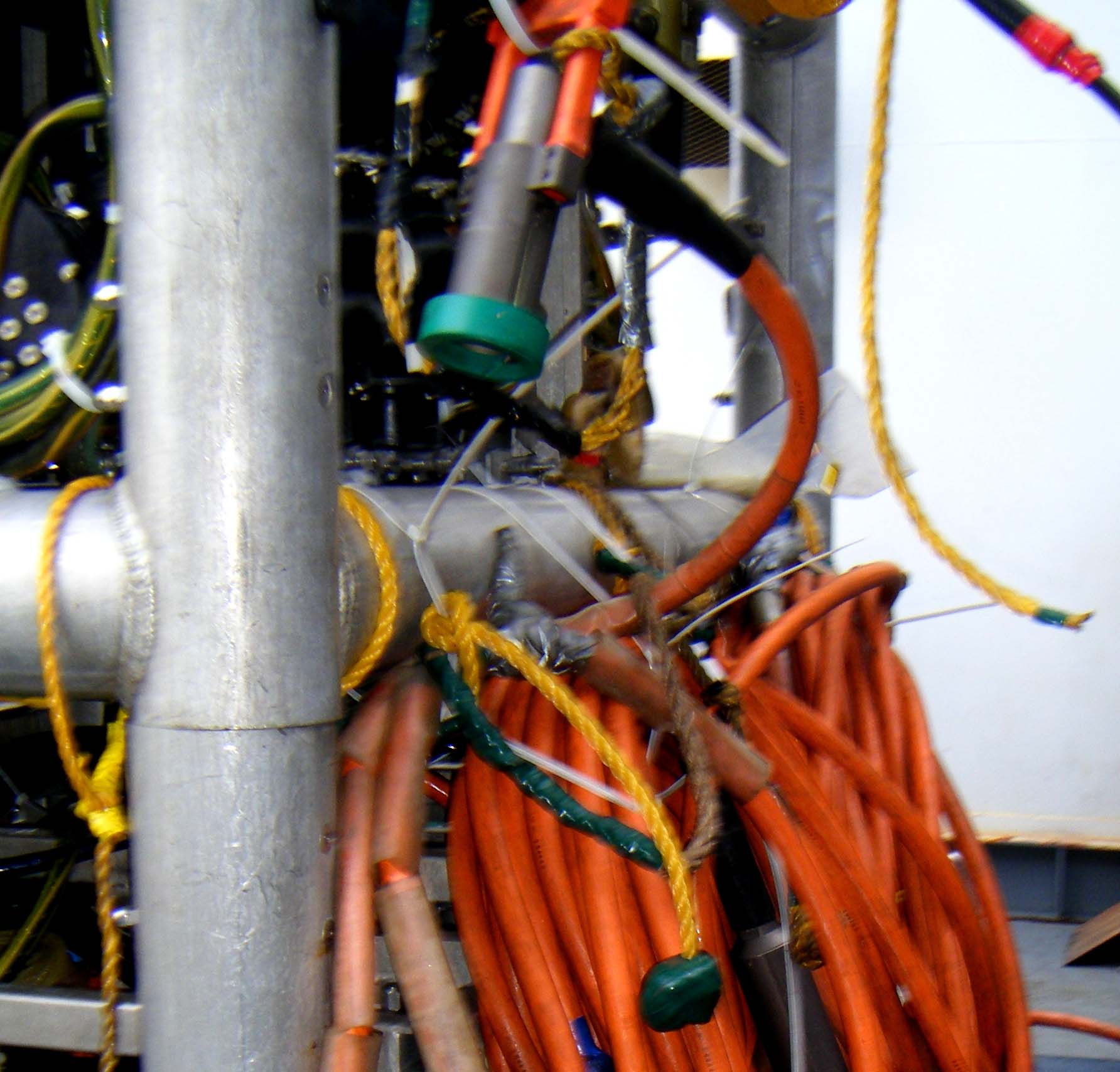 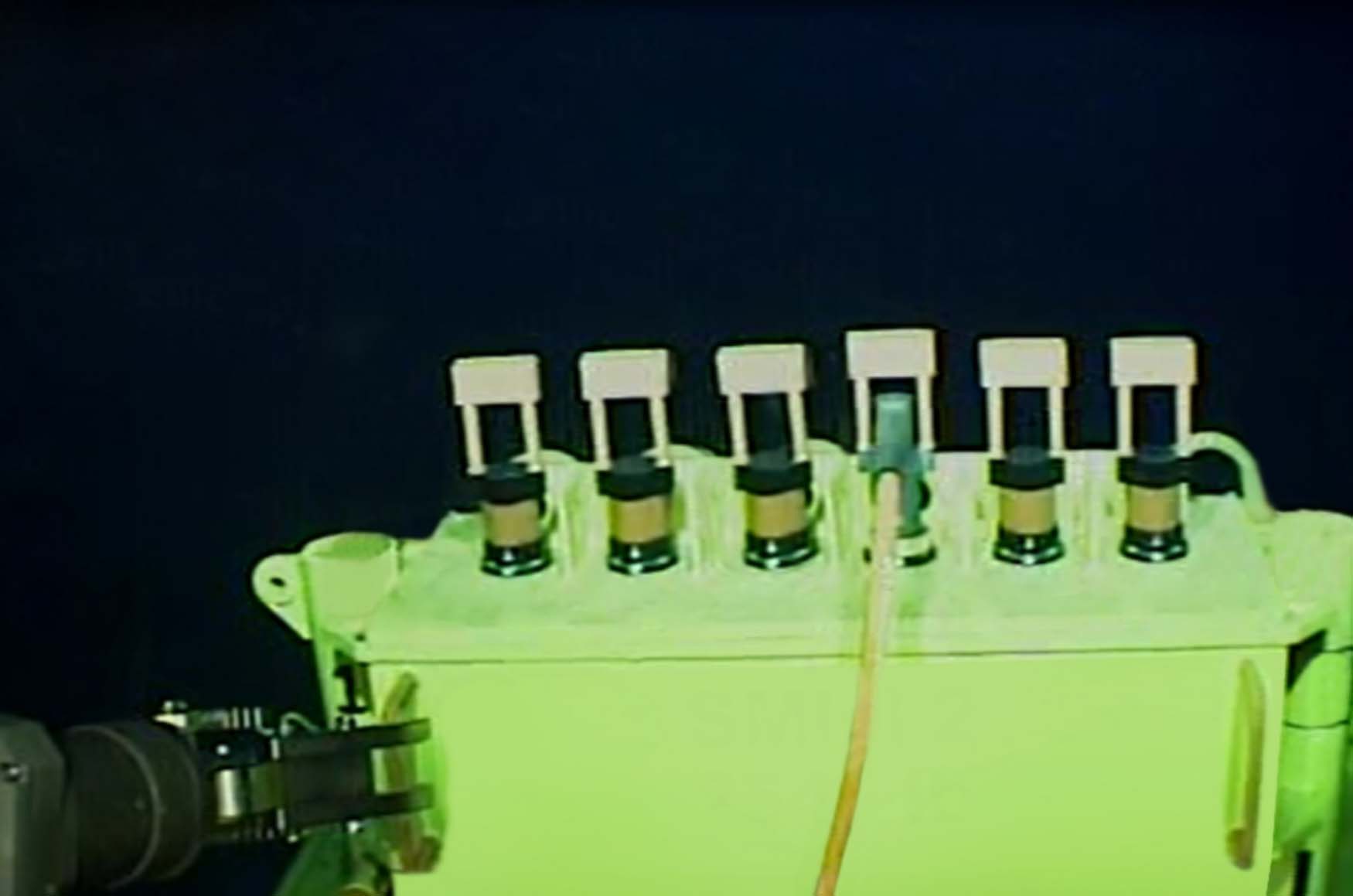 Weather and Crane Considerations
Of the two methods listed in Table 1, Flying Leads deployed using Method 1 are at greater risk of becoming damaged during anomalous weather. This is due to the fact that an ROV has to fly out of its cage and travel to the area where the Flying Lead is mounted. Dismounting the Flying Lead from here can be a difficult task during anomalous conditions, which can cause both the cage and ROV to heave, resulting in unsynchronized upward and downward motion, making it difficult to dismount the lead.

Should an ROV attempt to dismount a single conduit in this backdrop, the fiber optic and electric lines housed within the conduit can be damaged due to an ROV manipulators' inability to accurately grasp the Flying Lead. Conversely, because Method 2 places the Flying Lead on a deployment frame, once the frame has landed on the seafloor—and is unhooked from a crane—it remains fixed there. With this completed, the lead can be unspooled with a great degree of mobility via an ROV.

Bundled conduits [which utilize junction plates at each end]...are specifically used for the running of hydraulic and chemical lines, giving way to Hydraulic Flying Leads (HFL) and Chemical Flying Leads (CFL). Bundled conduits can also be outfitted with electrical and fiber optic lines. A jump out panel is typically utilized to connect a PBOF hose and connector to its designated point in this backdrop. 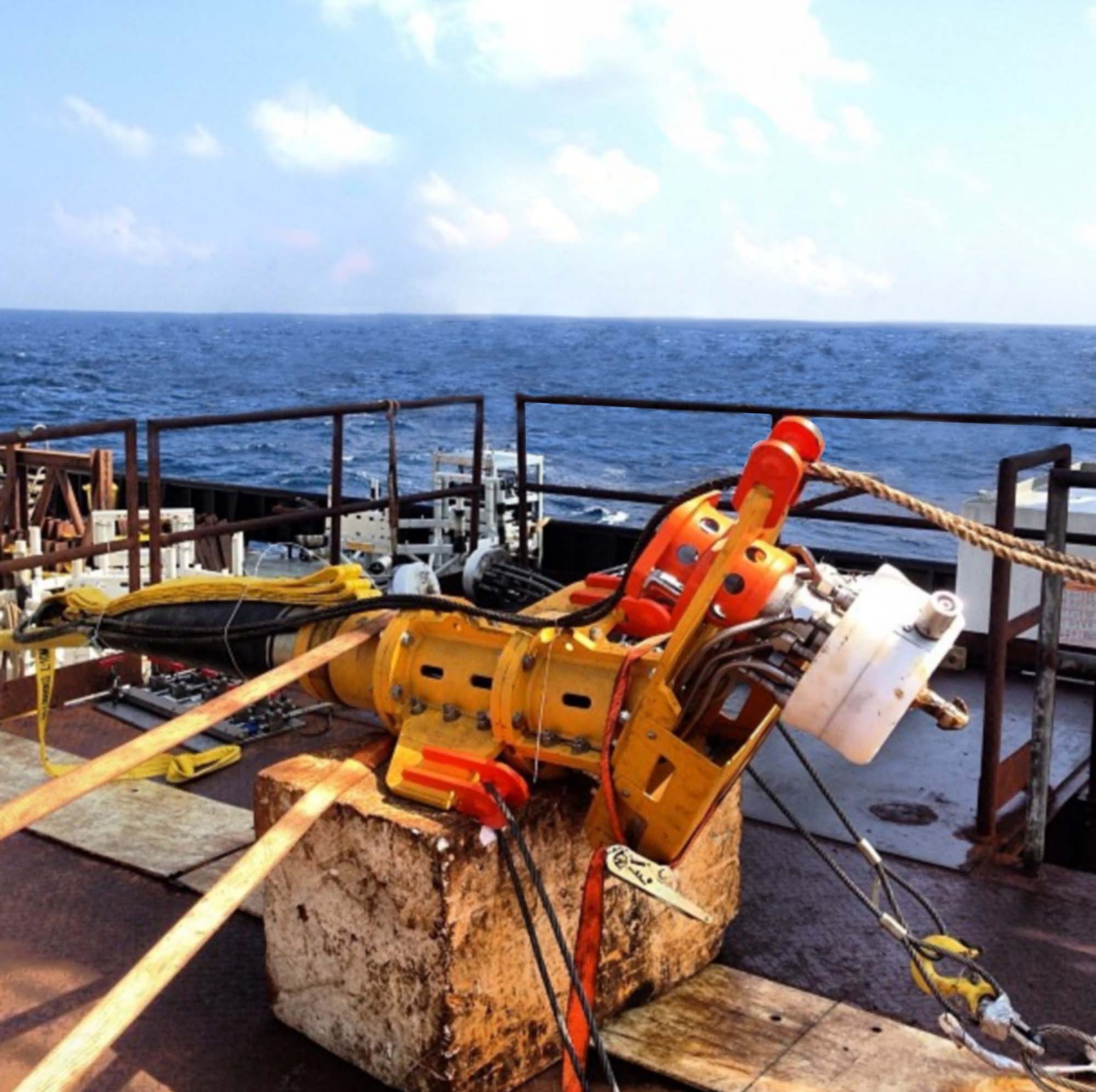 A bundled conduit flying lead prior to being installed in the South China Sea (Source: Alex McKinley).

It must be noted that because bundled conduits run an array of lines—this greatly increases their weight—thus requiring a crane to be used in conjunction with an ROV to unspool them.

Weather and Crane Considerations
Of the methods listed in Table 2, Method 2 has the highest likelihood of being affected by adverse weather, due to the fact that a crane must work in unison with a topside carrousel to overboard one end of a bundled lead at a time via a chute that is typically located on a vessel's stern. Furthermore, when bundled leads and accompanying junction plates are deployed during adverse sea states via a carrousel, such sea states can impact their physical integrity, especially when entering the splash zone because this is when they are the nearest to the bottom part of the chute and vessel's stern.

It is important to note that deploying a bundled conduit in this fashion is further compounded by the fact that an ROV must interface with the unspooled lead once it has reached its final hang off point, which can be difficult due to the lead's upward and downward movements. In contrast, bundled conduits via Methods 1 and 3 can be unspooled with greater ease once their deployment frame is unhooked from the crane upon landing on the seafloor. However, a crane is utilized to assist in handling and installing said conduit when a bundled conduit weight exceeds an ROV's handling capabilities. And in the presence of anomalous weather, it is difficult for a crane to keep a bundled conduit in a fixed position while an ROV attempts to handle and install a conduit. 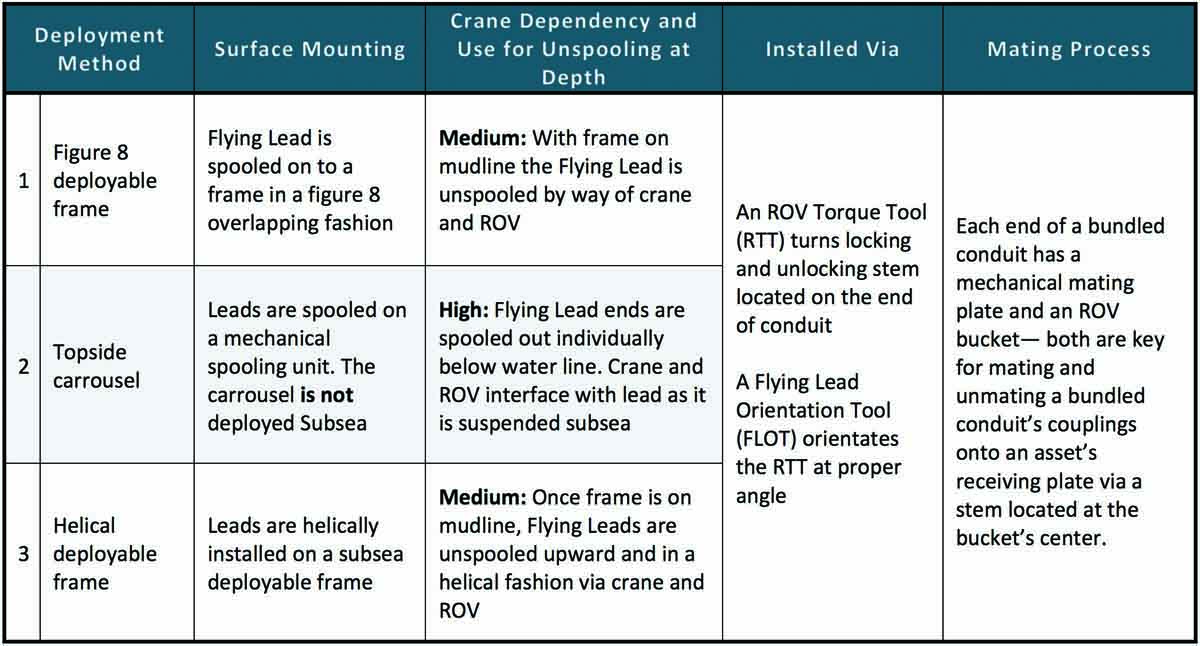 (Left) Flying Lead spooled on carrousel; (Right) Deck testing of lead before prior to being installed. 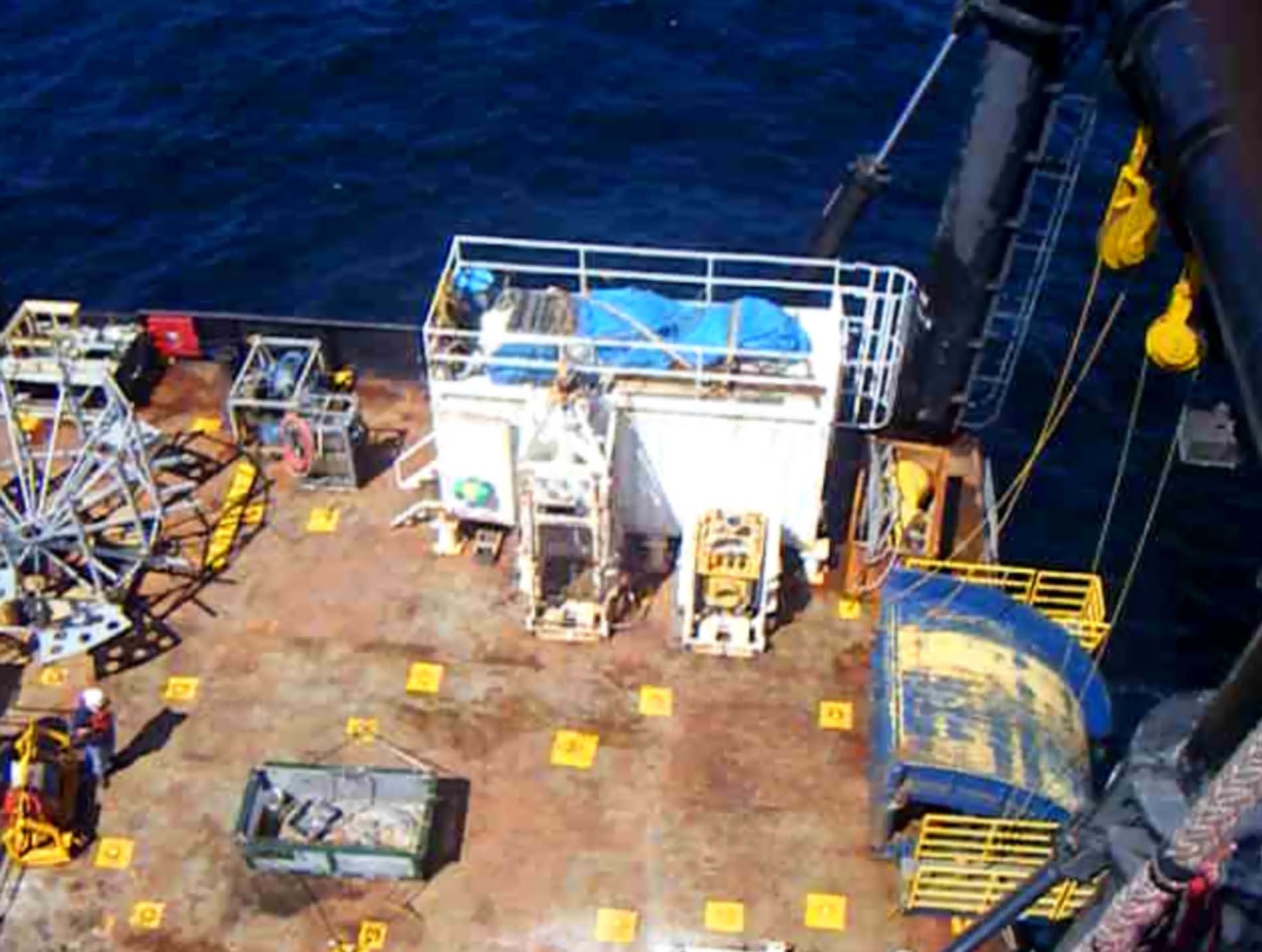 Conclusion
Now that Reaching Ultra has answered the "what" and "how" of Flying Leads via two previously published articles featured in Ocean News & Technology (1)(2), this article serves as an inseparable link between the two. A link that will further assist existing and future offshore professionals in having a full understanding of the manner by which to commandeer Flying Leads within a subsea production scheme—from the surface to the ocean floor.