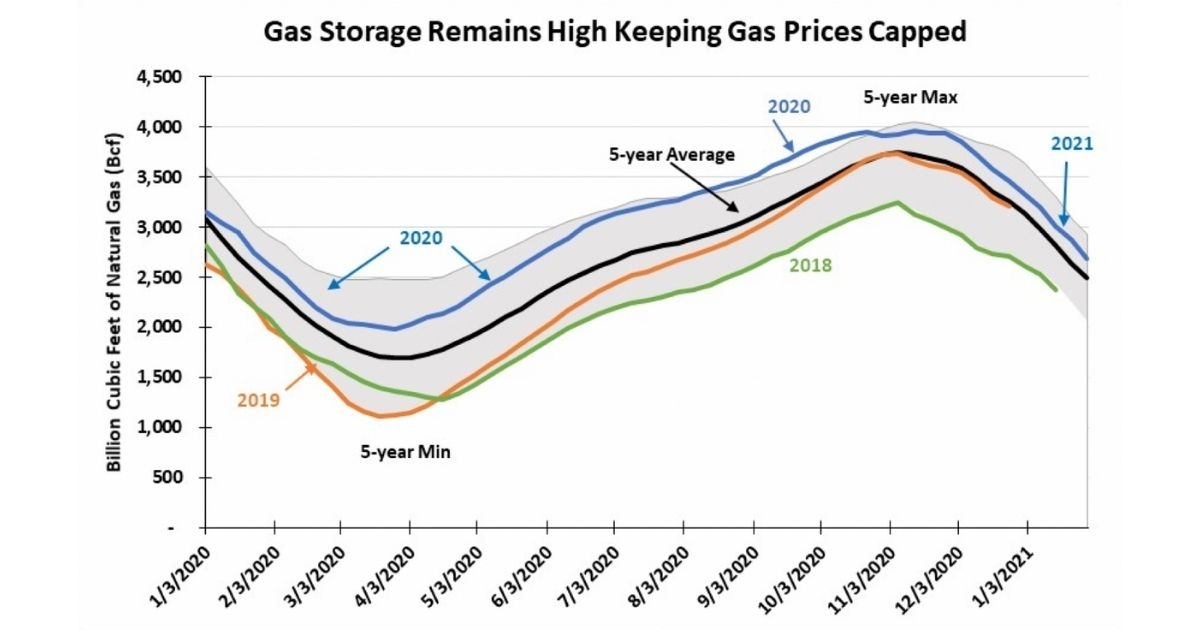 What a strange winter. Some regions have been buried under snow, while others barely received a dusting. The Polar Vortex, which was anticipated to swamp North America with bitter cold temperatures, barely delivered more than a few cold days—so far. To top things off for energy, we now have multiple groundhogs giving weather forecasts. Punxsutawney Phil and others offer views on what weather may be over the final six weeks of winter. By a 3-1 majority, Phil’s wintery prediction was overruled.

With an early spring on the way, weakening heating demand weighed on oil’s use at the same time global economic activity is being shut down in response to recurring outbreaks of coronavirus. The oil supply and demand struggle rages on, with hopes for a surge in economic activity as virus cases and hospitalizations retreat and vaccinations increase battling the trends depressing oil demand. Vaccines are the ticket for a return to a “normal” world—whatever normal means. 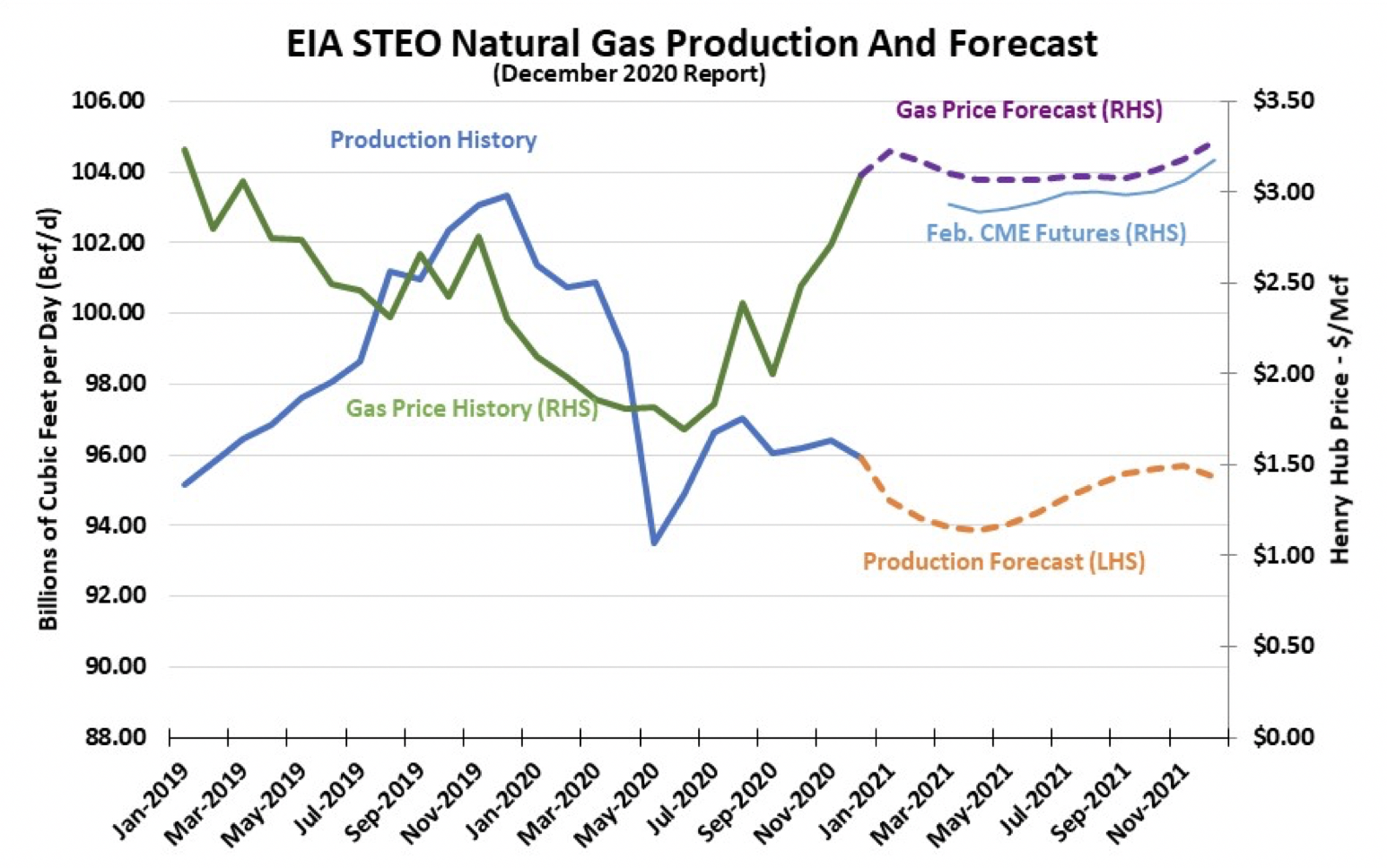 Saudi Arabia’s move to cut a million barrels a day of supply in the new year to help balance the global oil market lifted WTI above $50 a barrel. Growing optimism for an economic recovery in 2H2021 and increased government stimulus spending is driving the price above $55—the highest it has been in over a year. Oil company executives are telling investors they will continue to limit their spending. No more growth for growth’s sake. Sustaining production, reducing debt, and returning excess cash to shareholders remain their goals for 2021.

Market technicians expect oil prices to rise further. That is a risky bet. Maybe $50 will become a new price floor, however, the global oil supply is growing, while demand is capped both seasonally and due to economic shutdowns. Those are not conditions for rising oil prices. However, maybe a new commodity super-cycle has begun. Near-term prices will reflect the battle between optimism and reality. We cannot predict a winner, yet. 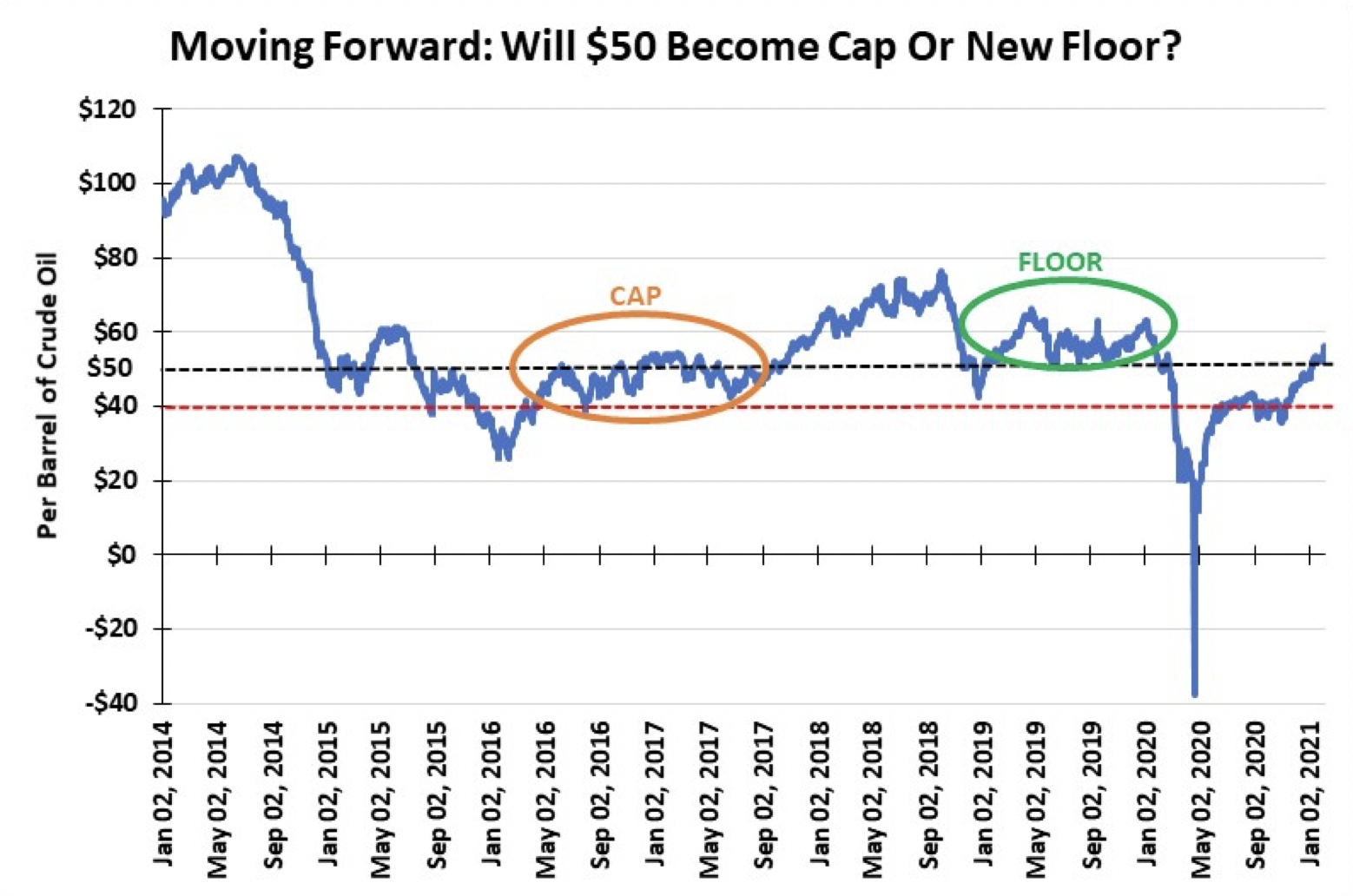 A disappointing natural gas withdrawal season so far, due to a warmer than normal winter, may be poised to change. Colder temperatures are projected for the next several weeks, which should strengthen natural gas prices. Whether the cold will be as sweeping as forecast remains to be seen. With gas supply not dropping as projected last summer, the supply/demand balance struggle will tug gas prices up and down daily based on weather reports.

Last summer’s optimism for falling gas supply and rising demand that had sent futures prices above $3 per thousand cubic feet has disappeared. The optimism was crushed as global gas demand collapsed resulting in the cancellation of numerous shipments of liquefied natural gas. Those cancelled shipments went into storage, depressing gas prices.

Climbing oil prices are driving the drilling rig count upward, signaling more associated natural gas supply is on the horizon. As a result, longer-term natural gas futures prices remained largely capped below $3. Examining the forward gas futures price curve shows that only during the 2021-2022 winter months do gas futures prices breech the $3 mark. This reflects traders’ and producers’ views that gas supply will continue to be adequate for meeting the needs of the domestic gas market, as well as satisfying growing LNG export demand.

Recent weekly gas storage withdrawals are falling within the market’s expectation. Therefore, gas prices are not moving much in either direction. They are influenced more by the outlook for weather, and the most recent forecasts are helping lift spot prices. As of the end of January, gas storage is still above both the prior year and five-year average levels.

Besides concern over the absence of bitter cold temperatures across the nation, the Biden administration’s push of an anti-oil and gas policy agenda is seen as limiting the long-term growth prospects for natural gas, while ignoring the role this cleaner fuel has played, and can continue to play, in reducing United States carbon emissions. The new administration’s policy is clearly a sop to the left-wing of the Democrat Party, which continues to push for a Green New Deal. Although espousing that it does not embrace the GND, the Biden administration holds to a view about the nation’s energy future that is likely to be unraveled by the reality that renewable fuels remain more expensive and produce less energy per unit than oil and gas. Until politicians and bureaucrats come face-to-face with this reality, the fossil fuel industry will be constantly pressured to ‘go out of business.’

Natural gas prices will only begin a sustainable rise when the market becomes convinced that gas supply is inexorably in decline with demand remaining healthy. These market dynamics are not ones seen on the evening weather forecast.