A History Of Birns Underwater Lighting: 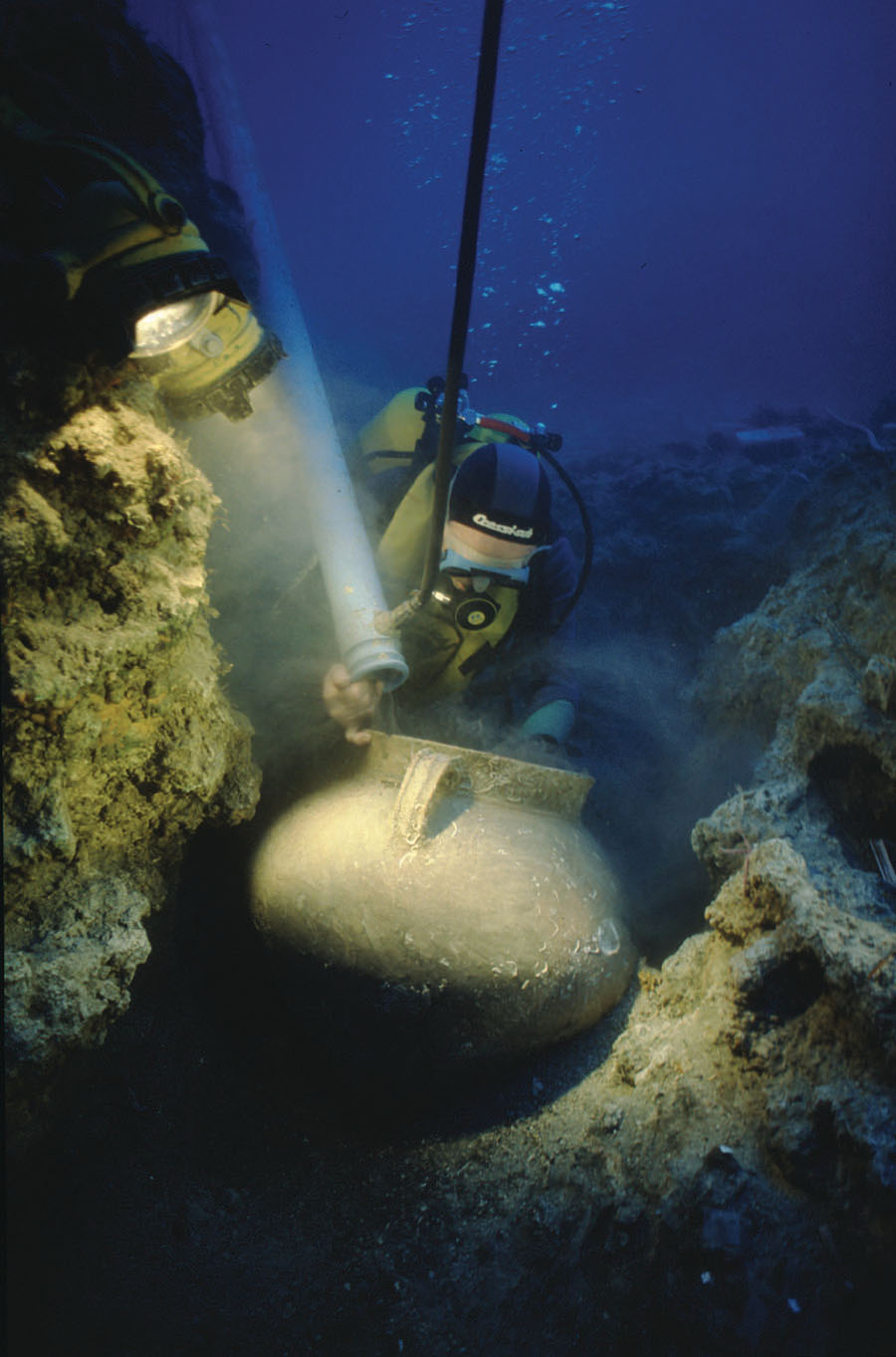 INA founder George Bass at work in the Bronze Age (1310 B.C.E.) Uluburun shipwreck off the coast of Turkey. BIRNS Snoopers™ illuminate the project as he uses an airlift to gently vacuum silt, while excavating the contents of a Cypriot pithoid krater (or large vase) inside of which Cypriot fineware pottery was discovered. Photo credit: ©INA, Photo by Don Frey.

Underwater lighting for the marine industry provides a diverse suite of advanced capabilities—from illuminating the depths for manned and unmanned vehicles and providing divers with brilliance that can pierce murky waters to delivering reliable lighting performance for security and salvage applications. Today’s subsea lighting systems are incredibly powerful and robust and are trusted in demanding oceanic environments. The industry has grown and, in doing so, has become more sophisticated as lighting technology and capability has developed. BIRNS, Inc. has been at the forefront, driving lighting technology for the marine industry for more than 60 years. The company has a rich heritage of setting milestones in subsea lighting technology, many of which included enabling some of the most wellknown marine projects and archaeology discoveries in history.

Some of the earliest marine lighting systems were tungsten halogen. When tungsten halogen lamps were first patented in 1958 by Elmer Fridich and Emmett Wiley, they introduced a small amount of halogen into the design of existing tungsten filament lamps initiated and patented by Edison; their new approach halted the migration of the tungsten particles, resulting in both longer lamp life and brighter illumination. The design offered additional advantages such as a smaller footprint along with the chemical reaction of the halogen cycle—the filament cools and is renewed when the lamp is switched off. Thus, tungsten halogen was poised to light the way to significant advancements in marine lighting and oceanic exploration.

Just a few years before this breakthrough, BIRNS opened its doors (in 1954) and initially began in the underwater industry by creating professional underwater camera housings. In 1956, the company was asked to provide such housings with 400-ft magazines for the U.S. Naval Ordnance Test Station in Pasadena to film the first ejection mechanism from the secret Polaris Missile Firing Submarine project. Shortly thereafter, the Navy asked BIRNS to develop underwater lighting systems for a range of subsea projects, including the U.S. Man-In-The-Sea program. BIRNS created custom tungsten halogen lights that were used for Sea Labs I, II and III. Sealab I was a 40-ft x 9-ft windowless habitat that housed four aquanauts in 1964 for 11 days at a depth of 200 ft. The groundbreaking project was initiated to test the viability of saturation diving.

The BIRNS SeaQuartz Mark IX lights chosen by the Sealab designers had a depth rating of 9,000 ft and had 1,000-W quartz iodine bulbs, with 65,000 center-beam candle power and a 3,200° Kelvin rating. They were capable of a record 30 days of continuous use without lamp burnout, well over other commercially available options at the time that had only 8 hours of lamp life. The lighting systems were also used during an extensive search by the U.S. Navy to find a “Broken Arrow” (a missing hydrogen bomb off of the coast of Spain in 1966) and to illuminate the construction of a nuclear power plant in Antarctica. In 1965, Sea Lab II was designed to house 11 aquanauts for 30 days at a depth of 200 ft. It was 50 ft long and 12 ft in diameter; in this iteration, more extensive work was done—from testing undersea tools and mining ore samples to studying the ocean floor. Sealab III was created in 1969 for operation at a depth of 600 ft, with teams of 45 aquanauts living and working for successive 12-day periods during what was to be a 2-month project. In total, Sealab III had more than 40 BIRNS SeaQuartz lights installed on its exterior. After the accidental death of one of the divers, the Navy terminated the program.

One of the early subsea lighting models was the BIRNS Snooper™, a 3-km rated 33,000-lumen tungsten halogen floodlight that could be handheld or mounted on diving bells or vehicles. It was engineered with 3,200 K illumination and had a highly polished internal parabolic reflector and a high output lamp in its focal point. The system had a bulletproof tempered borosilicate glass lens; in fact, during the Vietnam War, the U.S. Navy mounted the lights around a dock in Cam Ranh Bay where 30 Snoopers™ withstood 1,440 grenade explosions over a period of 30 nights, with only three suffering lens damage. The system also had a reinforced, tempered cast aluminum body with mechanical impact protection and four sealing operations. It should also be noted that by this time, the humble but incredibly important O-ring seal had been invented by Niels A. Christensen and was beginning to be widely used in the marine and diving industry.

BIRNS Snoopers™ were used in pivotal submarines, salvage vessels, and offshore oil exploration systems during key oceanic projects in the 1960s and 1970s—from Vickers Oceanics Pisces sub in 1968 and Oceaneering vehicles to the two-person Clelia submersible. BIRNS Snoopers™ were also used by Intersub on the vehicles PC1201 and PC1202 and the Pisces class boat of Vickers Ltd. And the Oceaneer I as well as Perry submarines Seatask and Submersible Work Chambers operated by Divcon International. The U.S. Navy assigned a Federal stock number and a Navy stock number to Snoopers™ in the 1980s. Peter Gimbal and Oceaneering International successfully salvaged the Bank of Rome from the wreck of the Andria Doria using handheld Snoopers™ in 1981. The Italian luxury liner sank in 1956 and was ultimately found at a depth of 225 ft in the murky waters of the Atlantic. The safe contained packs of American and Italian currency and travelers checks.

The Institute of Nautical Archeology (INA) used these powerful lights in 1985 when finding, at 3,500 years old, the oldest shipwreck ever discovered, off the coast of Turkey. The Uluburun shipwreck was from the Bronze Age and had been a trade ship that sunk during the 14th century BCE. The INA and Texas A&M filmed the salvage operation and used 1,000-W Snoopers™ for the 2-month project. The wreck yielded gold, silver, bronze, and pottery as well as illuminating new information about trader routes and nautical capabilities of that era. Based on industry demand, BIRNS created the BIRNS Snooperette™, a compact tungsten halogen light with a depth rating of 2,461 m. It was created for both helmet-mounted use and for vehicle use. The Harbor Branch Johnson-Sea-Link research sub explored the wreck of the ironclad civil war ship the Monitor off the coast of North Carolina in 1977 with Snoopers™ and Snooperettes™. In 1982, the National Geographic Society found the warship Hamilton and the USS Scourge (lost in 1813) in Lake Ontario at a depth of 300 ft with Snooperettes™.

LEDs were first developed in the 1960s, a lighting source that created light through electroluminescence in a semiconductor material. This illumination was generated from the movement of electrons in the semiconductor material and subsequently offered huge lighting advantages to a variety of industries. LED lights were able to provide enormous light output while remaining cool as well as provide extended lamp lives while using very little energy. By the mid-2000s, the first LEDs were produced that could generate 100 lumens/watt, making them comparable with the level of efficiency matched only by gas discharge lamps. By 2010, BIRNS expanded its popular lines of commercial diving and subsea lighting products to include new LED options, including chamber lights and helmet and vehicle work lights, all with long lamp lives and brilliant illumination. In addition to extensive use with underwater vehicles, the company’s LED chamber lights offered significant advantages, especially in that they did not generate noticeable levels of heat inside cramped diving bells and hyperbaric chambers. BIRNS developed custom HMI lighting systems for the Costa Concordia salvage project. These 380,000 lumen, 4-kW systems were used during the complex and several month long project to provide underwater illumination of up to 50 ft away at night.

Despite the popularity and efficiency of LED systems, there were and still are numerous applications for which gas discharge lighting systems are ideal and widely used. In 1986, the UK division of BIRNS developed the SuperEx, a CID (Compact Iodine Discharge) light with a 25-kV hot-restrike ignitor used by ONGC (Oil and Natural Gas Commission of India) on platforms in the Bay of Bombay. In 2012, BIRNS created a new system with high-pressure sodium vapor lamps that operated in a dry, one atmosphere chamber and, in concert with its high-reflectivity mirror-finish reflector, provided intense light output. BIRNS delivered 15 of these new HPSV BIRNS Pisces™ lighting systems in 2013 to Noble Energy. They were ordered for security use in the Tamar offshore gas field platform that came online in the Mediterranean Sea off of Israel that year. BIRNS supplied these unique 1-kW HPSV lights with 130,000 lumens and 24,000 hour lamp lives for extended underwater security usage for Tamar. This high-intensity gas discharge lamp had no filament, making it nearly impervious to shock and vibration. The systems were created with an especially robust construction, which included a housing fabricated with 63AA-electropolished AISA type 316 stainless steel and with a tough 1.06” thick tempered glass lens further supported by stainless steel reinforcing bars. 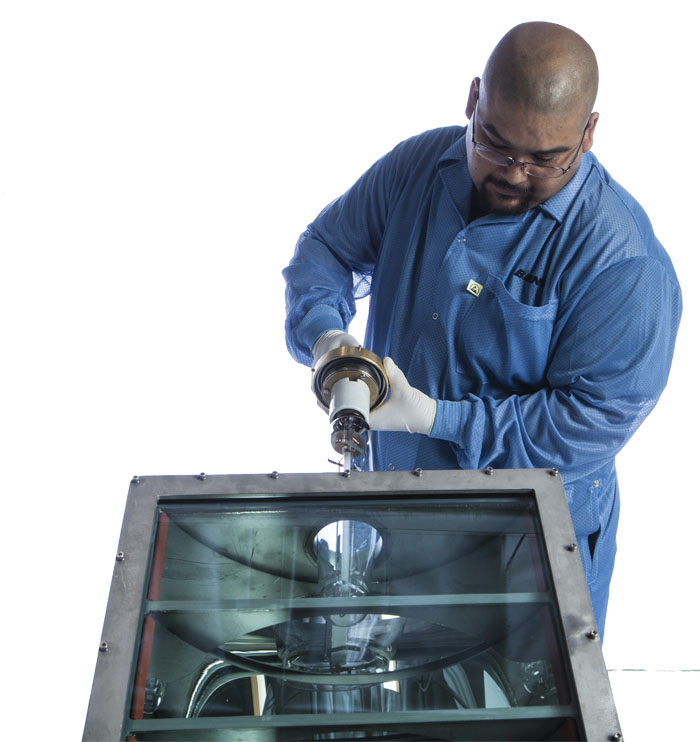 The company created the world’s first deep-submergence 575-W hydrargyrum medium-arc iodide (HMI) light in 1993. This amazing system, on the cutting edge of underwater lighting technology at the time, was made entirely of titanium and produced 49,000 lumens (85 lumens/watt). By 2013, BIRNS developed the BIRNS Titan™, a custom, rugged 4,000-W HMI lighting system that delivered 200,000 lumens. The powerful lamp featured a high Color Rendering Index (CRI) of Ra >90 and 6,000 K color temperature. It provided massive light output, mixing mercury vapor with metal halides in a quartz-glass envelope and energizing the resulting mixture with two tungsten electrodes of medium arc separation. The BIRNS Titan™ was created specifically for the salvage efforts of the Costa Concordia where divers worked around the clock to raise the wrecked ship. The crews needed to parbuckle the Costa Concordia and, in doing so, create a flat surface for the ship to rest on once it was righted. The seafloor would need extensive grouting to achieve that flat surface, necessitating many hours of continuous operations. It was during the nighttime operations in particular that powerful and robust lighting was essential. Divers needed lights that could light large areas during grout bag installation, and since the 24/7 operation was planned to last several months, lights that were rugged as well as easily maintained were necessary.

Once grouting was complete, the BIRNS Titan™ lights were particularly key in monitoring the vessel during parbuckling. The lights were used in clear water for several months at a time so the dive supervisors could ensure a wider area view of the status operations. Because of the scale of the salvage effort, the crews needed to see the results of the work and divers needed to be able to back up 50 ft away and see the whole area at once, even at night. This salvage project was in a very demanding, dangerous environment, with a great deal of incredibly heavy equipment; therefore, lightweight, delicate lights would never have survived. Plus, the salvage company planned to use the BIRNS Titan™ lights for many future salvage projects once the Concordia project was completed.

Marine lighting has advanced so significantly in just a few decades—from early tungsten halogen systems to today’s immensely bright LED and HMI options—and this advancement has brought to light a wealth of new information about the ocean and human history. There are exciting promises of what the future of subsea exploration will reveal with the increasingly powerful innovations in which marine lighting technology will likely evolve.