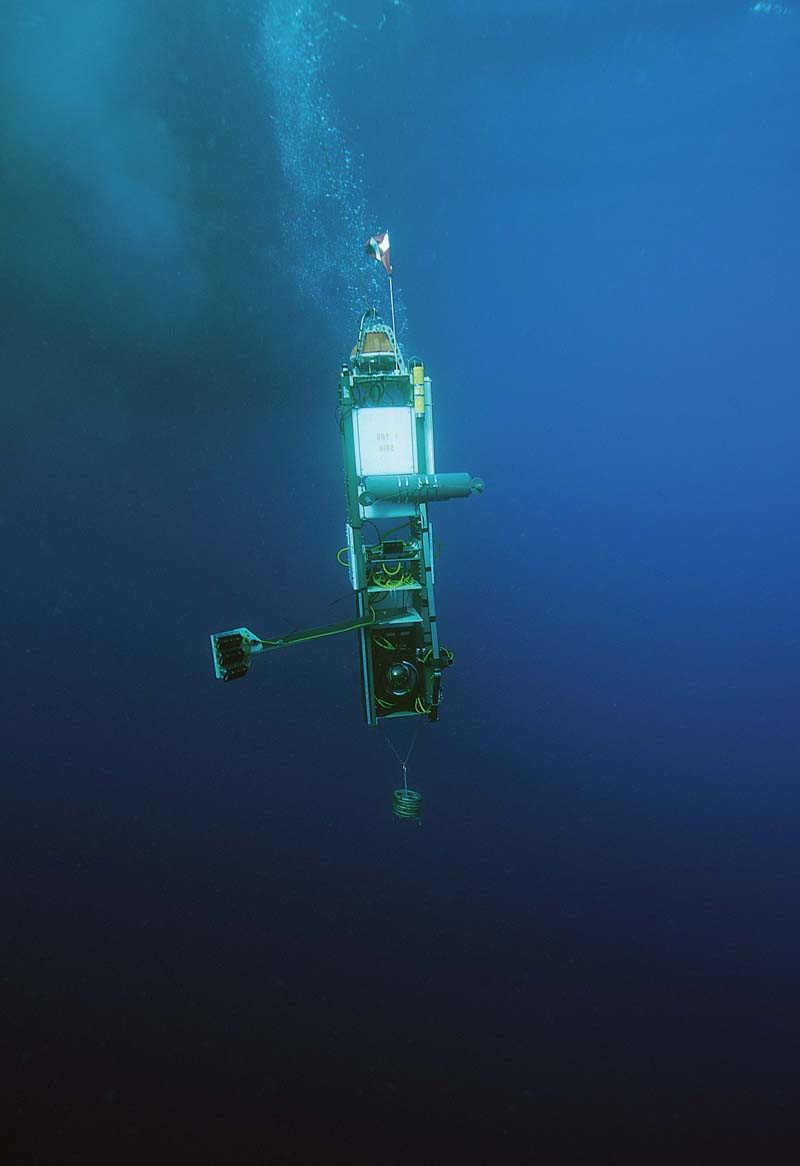 An acoustic release with multiple channels becomes a powerful robotic lander command and control unit. A single EdgeTech BART (Burnwire Acoustic Release Transponder) Board can be the control interface for diverse functions including:

Ocean scientists once had to rely on clever hacks of everyday items for release mechanisms. These can still be useful, but elegant new options are now available. 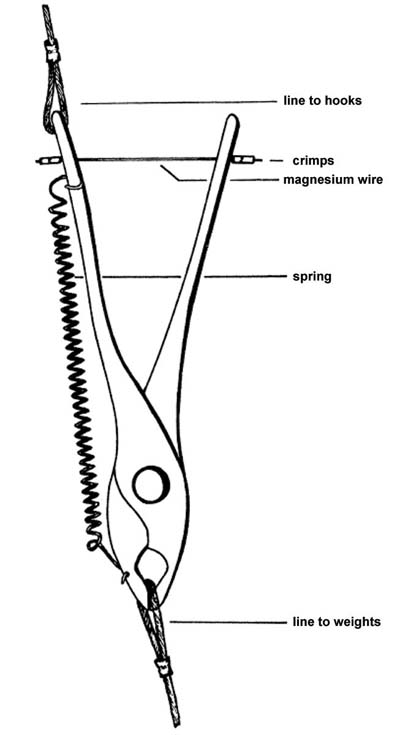 A wire-plier release mechanism. The magnesium wire has a diameter of 1.5 mm. When it dissolves in seawater by galvanic action, the spring ensures that the pliers will snap open to release the weights (from Phleger et al., 1970).

Acoustic releases can be used to lower anchors or other bottom-mounted platforms or systems that require precise placement on the seafloor. Using the acoustic release’s transpond feature provides relative range and angle prior to release just above the seafloor. 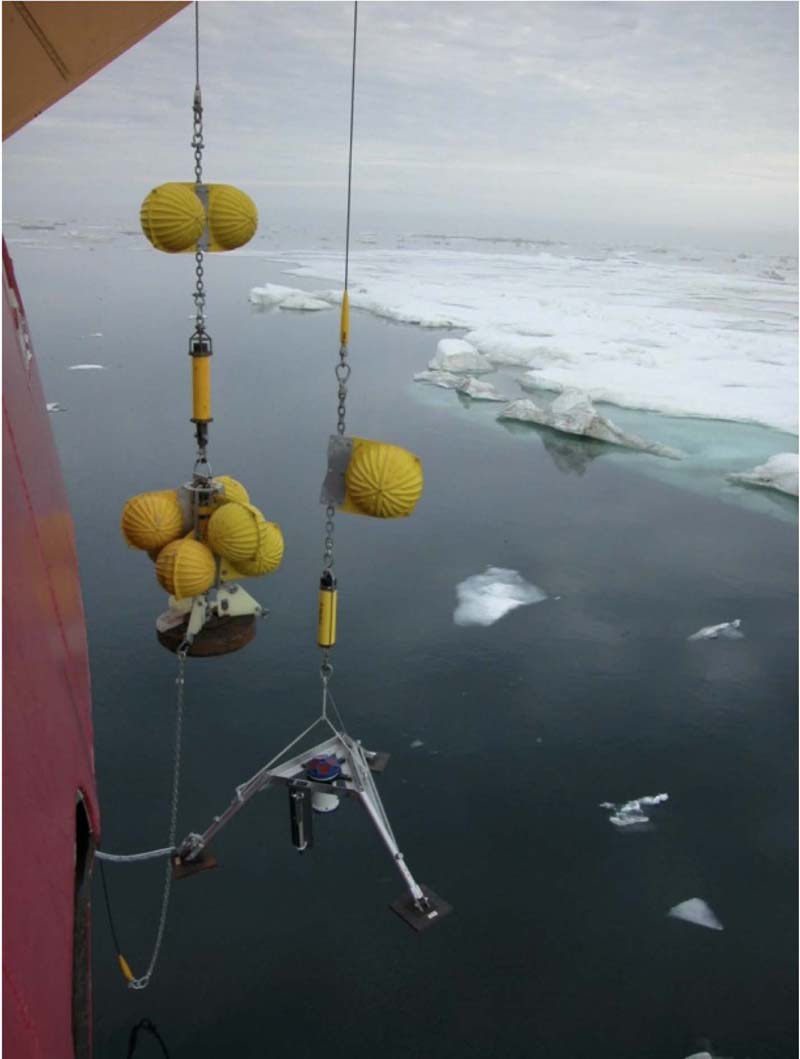 An acoustic release above the benthic lander package allows precise placement on the seafloor
before release from the ship.

For increased command-control options, EdgeTech, a company founded by the legendary Doc Edgerton in 1966 and now celebrating its 50th anniversary, created an acoustic release board that acts more like an acoustic command/control unit with the added capacity of two burnwire release circuits. The basic BART board has two release commands, transpond/range, reply enable/disable, and a release abort. A daughter board adds four more commands. A second daughter board provides a subset of 26 ascii characters. That’s a lot of distinct commands in a compact unit. The BART board is provided in a rectangular format, as would be appropriate for a cylindrical housing, or a circular board, that fits quite nicely in a 10-in. sphere.

The Nanolander (Global Ocean Design) fits the circular BART Board into a 10-in. polystyrene instrument sphere. Connectors on the sphere are used with command, control, and release functions. The Nanolander carries instruments for deployment off smaller ships of opportunity.

How acoustic releases work
Acoustic releases use unique command codes and multiple frequencies to negate ambient noise fields or ignore commands to other releases within transmission range. The acoustic releases mounted in cylinders have one or (sometimes) two releases, plus the ability to range and transpond. Release mechanisms either rotate a collar that restrains a pelican hook release or apply electrical power to a sacrificial “burnwire.” A third release design, a “Push-off” release, uses a rotating threaded shaft to back off a captured nut that supports the load through the threads. The rotating collar or threaded shaft designs may be used anywhere in the sea to their maximum depth rating and are also good for use in freshwater or oxygen depleted zones. 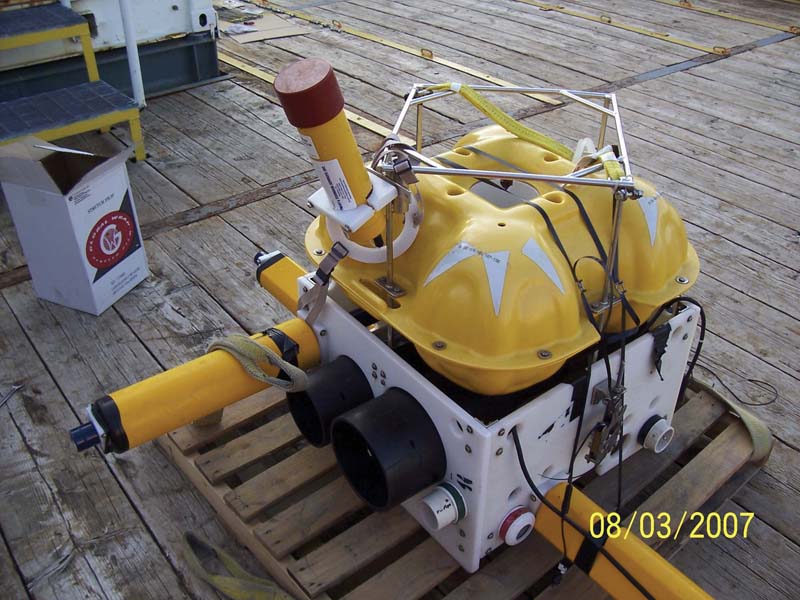 The sacrificial “burnwire” release utilizes an electrolytically sensitive metal link, such as Inconel 625, Nickel-Chromium, or even jacketed multi-strand 316SS. They are alternately called “burnwires,” “galvanic links,” or “release links.” Isolated from dissimilar materials, the Inconel and Ni-Chrome will last years without evidence of corrosion in seawater. They are resistant to biofouling. The 316SS link may be good for up to a year, limited by anaerobic corrosion occurring within the interior of the stranded wire inside the over-molded jacket. Connecting the metallic element of any of these links to the positive terminal of a 9-21vdc battery with a reference ground pin in the seawater provides a fascinating lesson in electrolytic corrosion and mechanical advantage, where a few AA batteries defeat great mechanical strength. When actively corroding, some of these release element metals produce a brown precipitate at a visually stunning rate.

An acoustic release, rather than a countdown timer, provides flexibility in recovery time; the experiment test period may demand an extended deployment, such as tides driven by a lunar cycle. It’s also possible the ship, personnel schedules, or weather may not be cooperating. Weather prediction is more art than science beyond about 4 days. With an acoustic release, the sensor or sampler package can remain in situ for a very long duration, up to 2 years using alkaline cells and up to 9 years using lithium cells.

Multiple releases for single function
Occasionally, for critical release applications such as instrument moorings, two single function releases are paired side-by-side to provide a redundant release mechanism. A chain connects the two pelican hooks with a link at each end, and the chain passes through a large forged ring. Either release can drop its end of the chain, and the chain will pull through the large forged ring as the mooring rises. An expendable iron anchor is connected directly to the forged ring by a second chain. This dualed or tandem arrangement provides two releases for a single function where the cost of loss is unacceptable.

Unique applications
An electric solenoid plunger, powered on by acoustic command, can be used to pull a plunger to release a pelican hook or drive a ratchet to incrementally turn a disk. An acoustic release can also be used to deploy a recovery line to the surface in order to recover a mooring anchor so that nothing is left on the bottom when the mooring is recovered. 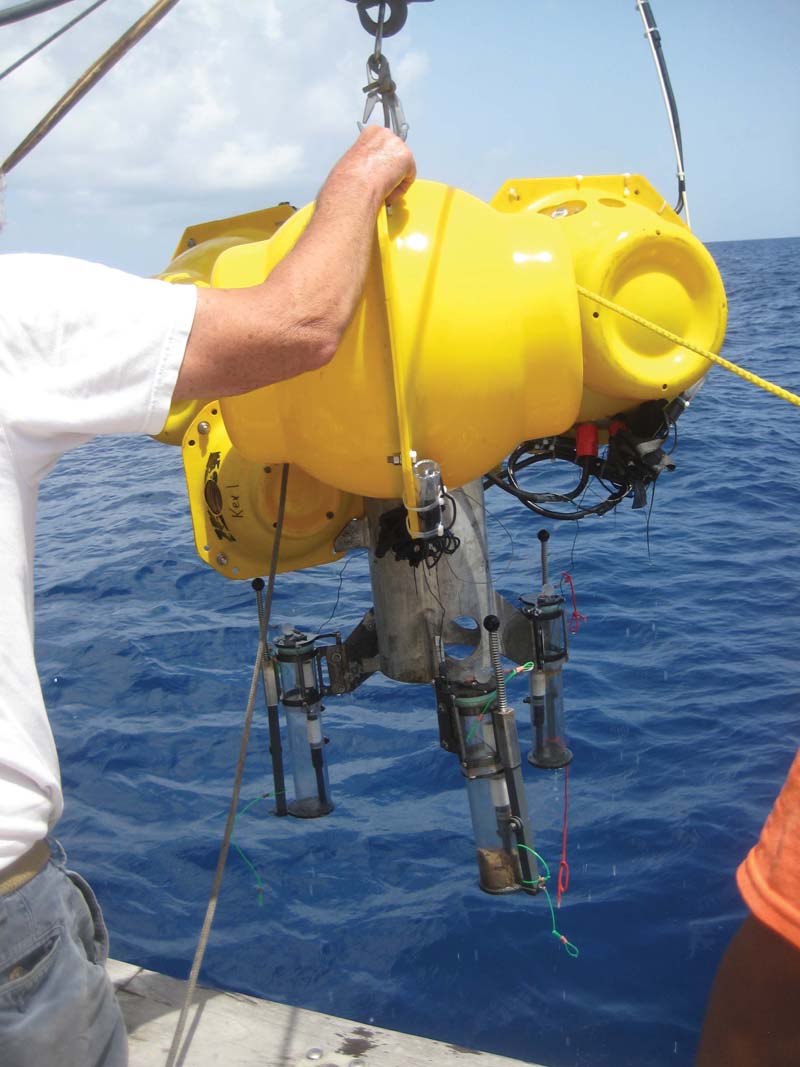 Some benthic landers may use a single release for multiple functions. Dr. Aristides Yayanos, Scripps Institution of Oceanography, captured hadal benthic animals in a trap that closed as the anchor was released. In similar application by Dr. Ken Richter, SPAWAR, sediments are captured in a free vehicle microbial power cell by spring-loaded doors that snap shut with the anchor release and vehicle rise.

In a Data Recovery Pop-Up Buoy from Scripps Institution of Oceanography, the release command simultaneously turned on the surface recovery beacons.

The transpond function may be used for Long Baseline Navigation (LBL), where a group of four or more transponders are positioned hundreds of meters apart, providing navigational waypoints for AUV ops, mooring motion measurements, and even tracking for fish migration studies. 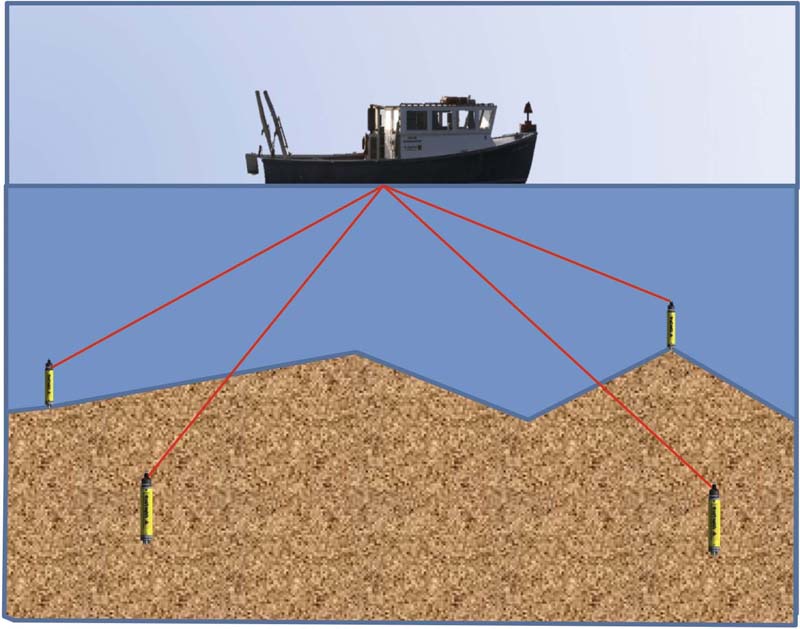 A ship uses the transponder function for precision navigation.

An LBL system has two main components. The first element comprises a number of acoustic transponders moored in fixed locations on the seabed. The transponders are typically mounted in the corners of the operations site. LBL systems yield very high accuracy of generally better than 1 m and sometimes as good as 0.01m. The positions can be converted from relative X, Y, Z position to real world coordinates.

One of the stranger applications is the detonation of unexploded ordnance (UXO), hazardous leftovers from the two Great Wars dumped at sea. These pose an active danger to fisherman, boaters, offshore construction and pipe laying. Once identified by side-scan surveys, an Acoustic Actuator is used with a high explosives charge to remotely detonate the UXO, activated from a safe distance either acoustically or with a timer. 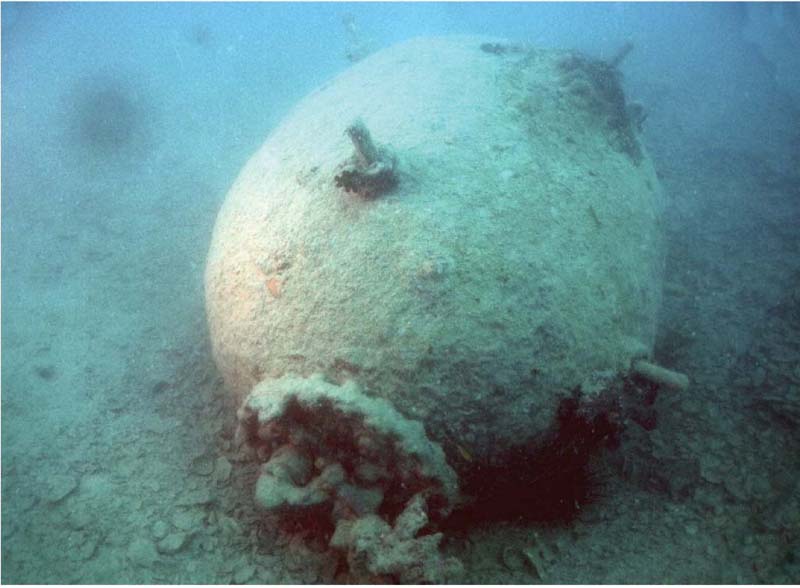 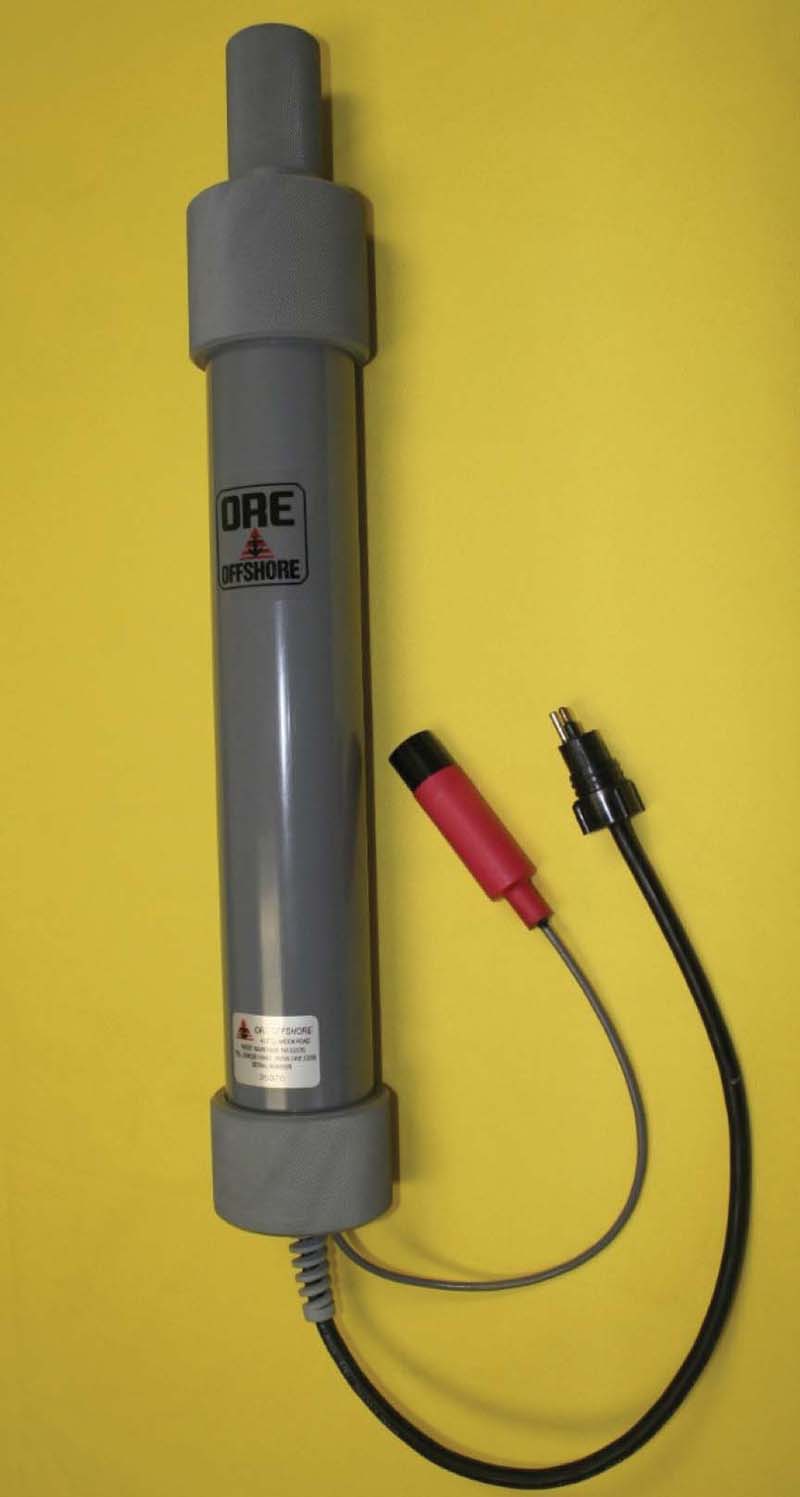 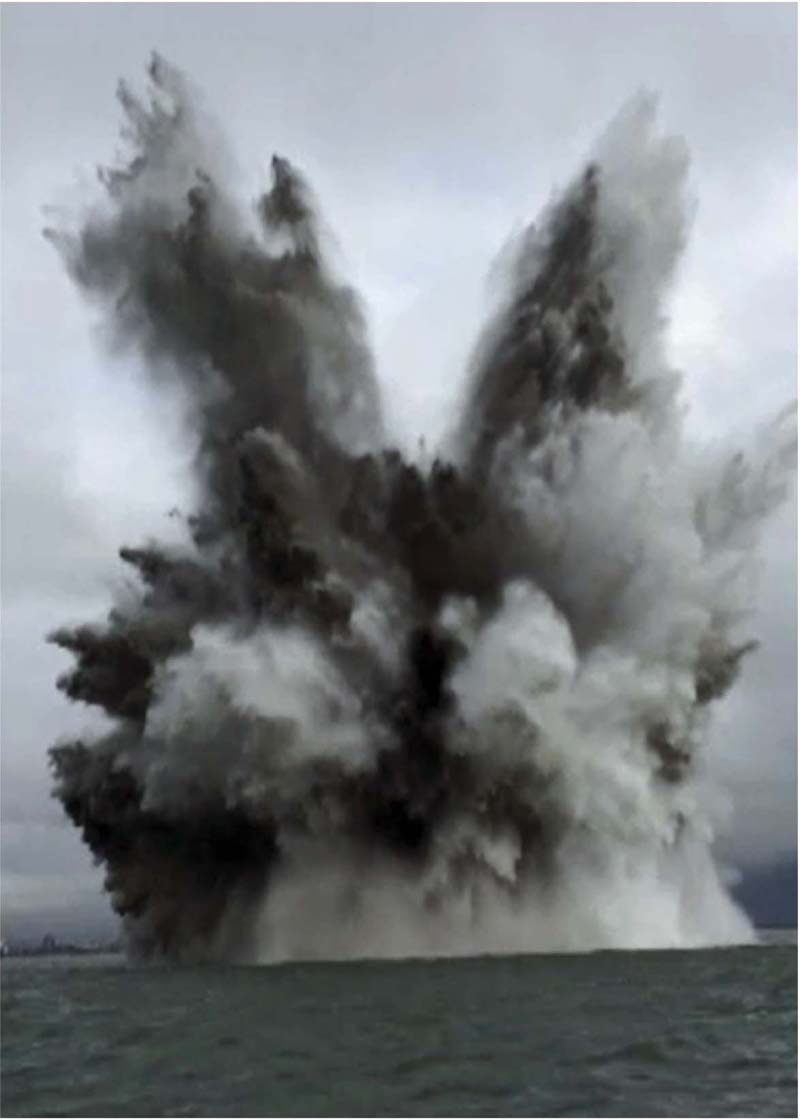 An unexploded mine (left), has an acoustic actuator (center) to trigger an explosives charge (right) using an acoustic release or a timer. 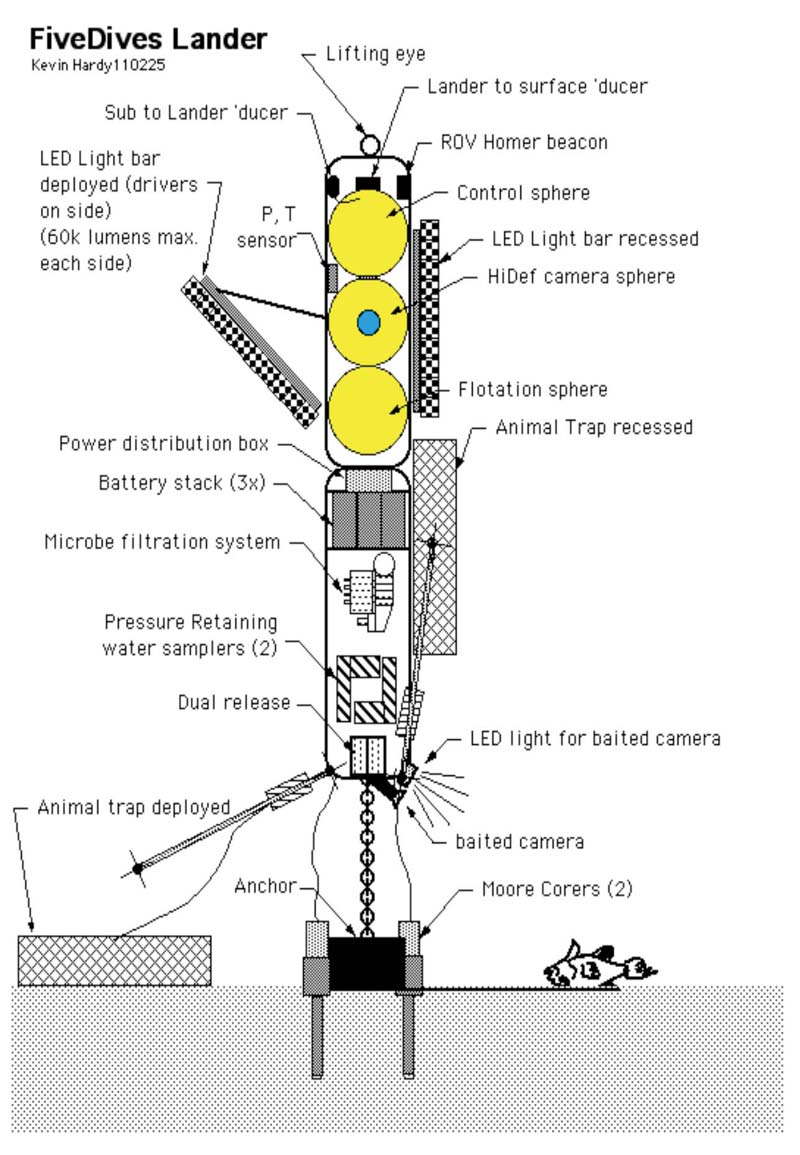 An artist's conception of a proposed complex benthic lander. The right side shows the sub-systems retracted during descent, the left side shows the systems deployed. A BART Board controls filtration systems, camera/light systems, and ROV homing beacons. (Illustration used with permission, Kevin Hardy, Scripps Institution of Oceanography.)

Once on the seafloor, acoustic commands deploy drop arms, rotate the vehicle for an in situ panorama photo, and other functions. Through-hull connectors bring the commands where needed: a camera/light system, water pump, acoustic recorders, drop arm, or solenoid valve. Once the mission is complete, additional commands are used to close traps, drop light arms, and other pre-release functions.

The EdgeTech transducer is oil filled and functions at any depth, as demonstrated by the author (Hardy) on DOV PATTY with Scripps Institution in the Sirena Deep of the Mariana Trench. The on-board BART Board received the release command on the first try at 10,700 m depth. The same transducer was qualified for operation on James Cameron’s DEEPSEA CHALLENGE Expedition’s Alpha Landers. 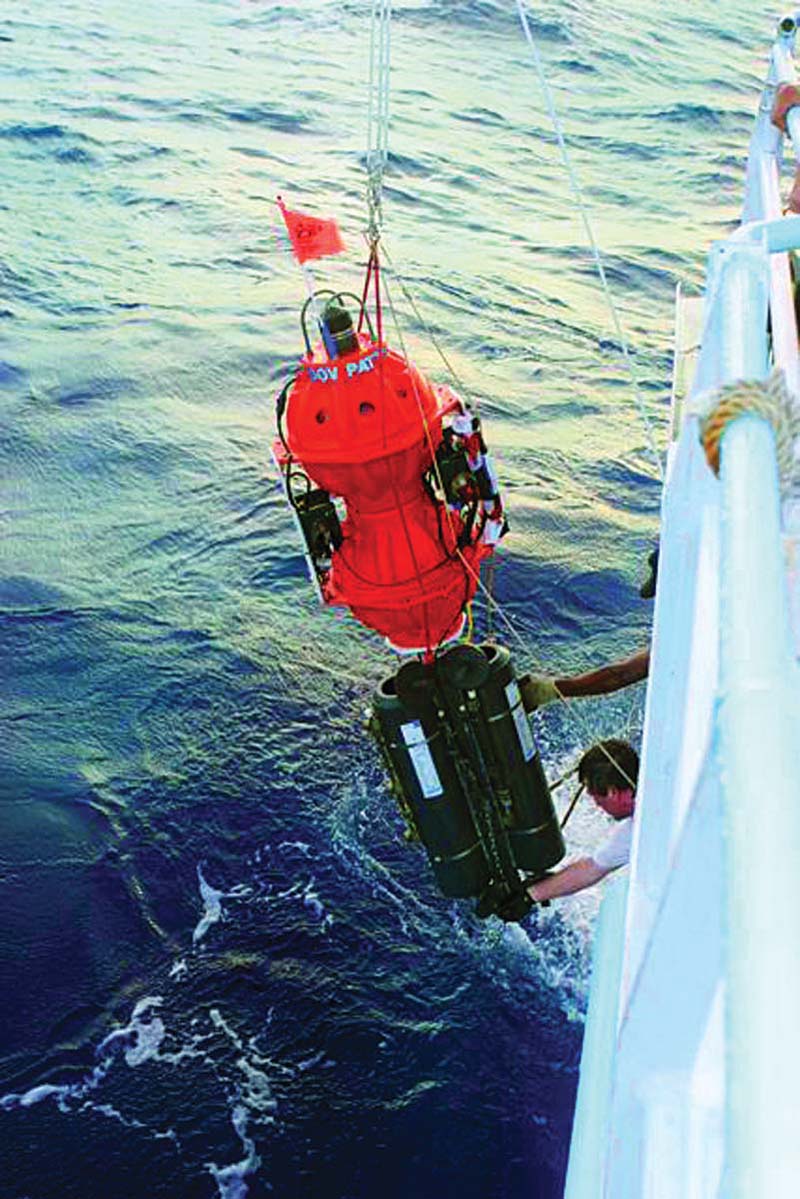 DOV PATTY is deployed to the second deepest place in Earth's Oceans, 2011, the Sirena Deep of the Mariana Trench. The engineering performance evaluation of the EdgeTech BART Board at these greatest depths was successful. A burnwire loop held the anchors and the pair of Niskin bottles open.

Operational tips
1) Transducer placement
It is important to place the release transducer in a location where it has a relatively open view to the surface to provide the clearest acoustic path for the shipboard transducer signals.

2) Corrosion control
Designers must be aware of dissimilar materials that will lead to galvanic corrosion. Isolation of the release housing from a benthic lander frame may be advised. Likewise, pelican hook and drop link should be of the same material.

3) Moisture control
A method to effectively remove moisture from the release electronics housing is needed as condensation may otherwise form on the electronics board when the sealed moist air is chilled below the dew point. Three choices are common: 1) if the release is prepared a day or more ahead of use, a simple desiccant packet of appropriate size maybe inserted into the housing. This will passively dry the air, but relies on dispersion of water vapor, which requires 1 or 2 days lead time; 2) high pressure dry nitrogen bottles and a vacuum pump are used to cycle in dry N2 (the high-pressure bottles have some obvious shipping drawbacks and inherent dangers in the field); or 3) a deck purge box uses a vacuum pump to draw moisture laden air out, then uses the vacuum to draw air back in, forcing it to pass through a desiccant cartridge, dynamically drying the air. 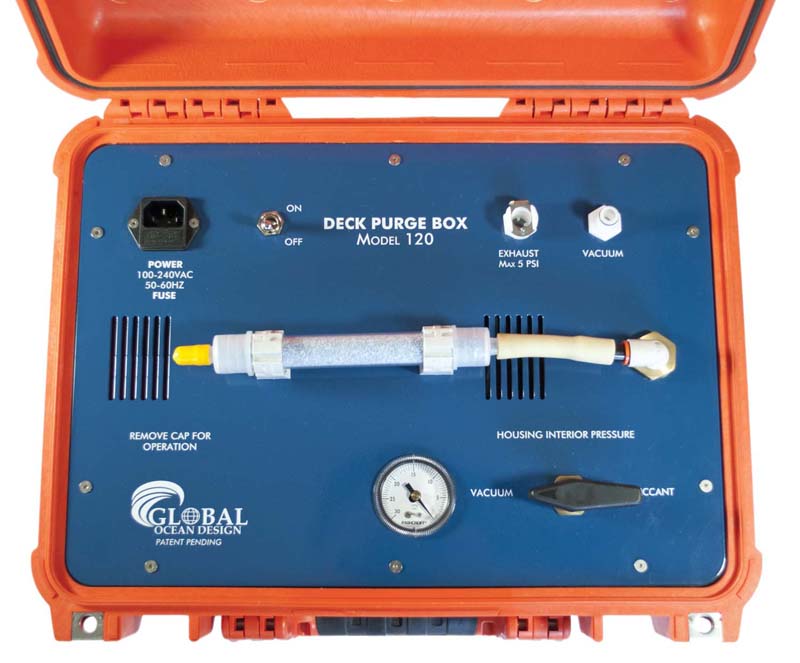 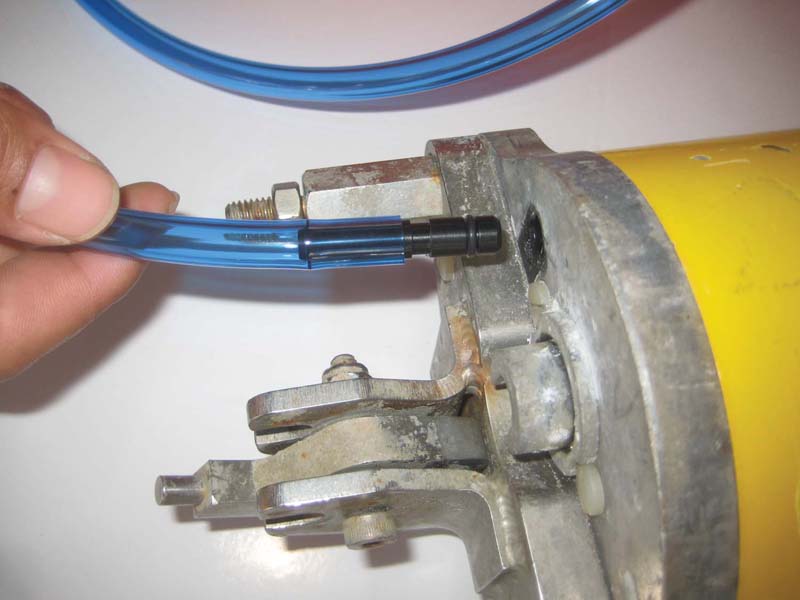 Conclusion
While this story has focused on benthic landers and moorings, acoustic releases can also find application in AUVs and ROVs.

Anyone who has been to sea will tell you “One ping means a lot.” It provides the satisfaction of knowing the system is operational on the seafloor, inferring so many things about the status of the entire benthic lander.

Acoustic releases can do more than just drop an anchor. Clever mechanical mechanisms can provide secondary functions without compromising the anchor release. And while not a true acoustic modem, the BART Board provides ocean engineers and marine system designers a powerful command-and-control system in a small, power efficient package at a very affordable cost. New applications will come from expanding mission requirements and the designer’s imagination.

Acknowledgements
The authors thank Greg MacEachern, EdgeTech, for his advice with applications, willingness to try new things, and always sharing from the wealth of his experience and knowledge.