Within its varied topographies and climates, the United States offers an abundant and diverse set of renewable energy sources for innovative technology developers to harness. One such emerging renewable energy industry is marine and hydrokinetics (MHK)—energy generated by waves, tides, currents, and ocean thermal resources. While researchers are only beginning to learn how to efficiently and cost effectively harvest MHK energy sources at a commercial scale, a recent assessment indicated that the United States has vast wave resources that, if harnessed, could provide significant energy generation. 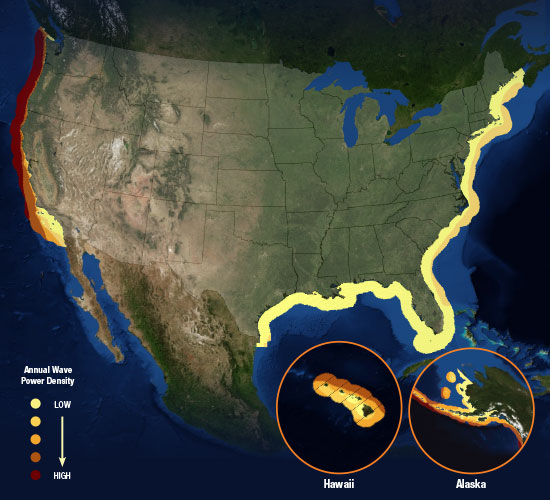 Wave Energy has the Potential to Power 5 Million American Homes
The 2013 resource assessment by the Electric Power Research Institute, created with support from the U.S. Department of Energy’s (DOE’s) Water Power Program, analyzed ocean wave energy potential along U.S. coasts. The report found that the technically recoverable resource for electric generation from waves is approximately 1,170 terawatt-hours per year (TWh/year), which is almost one third of the 4,000 TWh/year of electricity used in the United States.

Although the assessment’s technical resource potential does not factor in “practical constraints” such as economic, environmental, and regulatory considerations, developing just a small fraction of this resource could allow for millions of American homes to be powered with this clean, reliable form of energy. For context, approximately 90,000 homes can be powered by 1 TWh/year. Extracting just 5% of the approximate 1,170 TWh/year of gross resource potential could result in wave energy powering for 5 million American homes.

This enormous wave energy resource has characteristics that will help it become a price-competitive, low-carbon energy supplier in the United States. For example, with more than 50% of the U.S. population living within 50 miles of the nation’s coastlines, wave energy’s close proximity to coastal load centers reduces transmission costs and challenges. And these coastlines’ higher-than-average electricity prices bring the levelized cost of wave energy generation closer to the costs of conventional energy generation, which will help wave energy become price competitive.

With all of these considerations, DOE sees wave energy as an opportunity for the United States to engage directly in an emerging area of energy science while developing a new suite of renewable energy technologies that will stimulate a new industry, help reduce emissions, and meet energy and climate objectives. DOE is pursuing this opportunity by cost-sharing some of the initial financial risk for targeted wave energy technology research, development, demonstration, and deployment projects as well as environmental impact and siting research. By accelerating project deployment, evaluating early stage technologies’ viability, and addressing market barriers, DOE is working to drive down wave energy technology costs and attract private-sector financing for future commercialization.

How Does Wave Energy Generation Work?
Not unlike wind energy’s status 20 to 30 years ago, wave energy is in the early stages of commercial technology development, and wave energy devices today are diverse in form and function. As such, DOE funds a wide range of emerging wave energy technologies so that researchers and developers have space to make dramatic and radical innovations that will revolutionize marine energy production. A comprehensive list of marine and hydrokinetic device configurations, current projects, and development companies is provided by the Marine and Hydrokinetic Technology Database on OpenEI.org.

DOE’s Wave Energy Technology Research, Development, and Demonstrations
Over the past 6 years, DOE has awarded over $110 million to fund technology R&D projects related to MHK energy systems, infrastructure, and instrumentation, many of which have directly benefited wave energy development. In 2014 alone, DOE supported $29.5 million in competitive awards to industry and university R&D efforts, including the several notable examples below.

Augmenting R&D Capabilities: The nation’s universities contain a wealth of R&D expertise and intellectual capital that can help advance MHK technologies. With $4 million in DOE funding, a new university consortium was formed in 2014 that will support the advancement of wave and tidal energy technologies by leveraging existing resources at the Northwest National Marine Renewable Energy Center. Oregon State University, the University of Washington, and the University of Alaska Fairbanks will combine their field-focused R&D capabilities to develop autonomous robotic devices for MHK operations, design arrays with improved performance, and standardize approaches for wildlife monitoring at MHK projects.

Department of Defense (DoD) Partnership: DOE is partnering with DoD to leverage the Navy’s Wave Energy Test Site (WETS) off the waters of Marine Corps Base Hawaii—the nation’s only grid-connected open-water test site—for testing of wave energy conversion (WEC) devices. Northwest Energy Innovations’ Azura™ device (previously WET-NZ), which was first awarded funding from DOE in 2010, is now at an advanced stage of development; a full-scale, pre-commercial prototype device was deployed at WETS in March 2015. Additionally, in 2014, DOE selected funding recipients to design, build, and test advanced WEC systems in the ocean environment at WETS berths located at depths of 60 m and 80 m in Kaneohe, Hawaii.

Addressing Environmental Concerns: To support the development of cost-effective environmental monitoring technologies, in 2014, DOE provided a total of $2.75 million to five new technology development projects that address a variety of environmental concerns, including noise produced by devices and the behaviors of fish and marine mammals near devices.

The Wave Energy Prize
The DOE is kicking off a new MHK technology initiative called the Wave Energy Prize. This public prize challenge will encourage the development of new WEC devices that demonstrate an ability to convert twice as much energy from ocean waves into electricity as current WEC technologies.

By implementing a public prize, DOE aims to attract newcomers to wave energy technology development in addition to meeting the Prize’s objective of developing revolutionary WEC devices. The nature of a prize challenge levels the playing field significantly, allowing new participants to bring forward ideas that may not otherwise have made it. For example, the compressed timetable of a prize challenge, in this case just over a year and a half, favors lean and agile entities, which is characteristic of many newcomers. Thus, the Prize will create opportunities for all developers—new and experienced—who can step outside the box and depart from traditional R&D methods to showcase novel approaches.

By attracting new participants while also encouraging new technologies from existing companies, DOE is engaging a broad range of viewpoints with very little risk. The investment on the part of the government is based on performance; those participants whose technologies perform well will receive seed money, and the winner will receive a prize purse. This approach enables R&D to accelerate the speed of innovation.

Catching the Wave
Teams participating in the Wave Energy Prize have an opportunity to benefit on many levels. Qualified teams will have a chance to take part in two rounds of testing. In the second round of testing, finalists will test their scaled WEC prototypes at the nation’s most advanced wave-making facility, the Naval Surface Warfare Center’s Maneuvering and Seakeeping (MASK) Basin in Carderock, Maryland, beginning in the summer of 2016. Additionally, DOE will give seed money to finalist teams to lower the barriers to entry encountered by many innovators and provide an additional prize for the winning team(s). 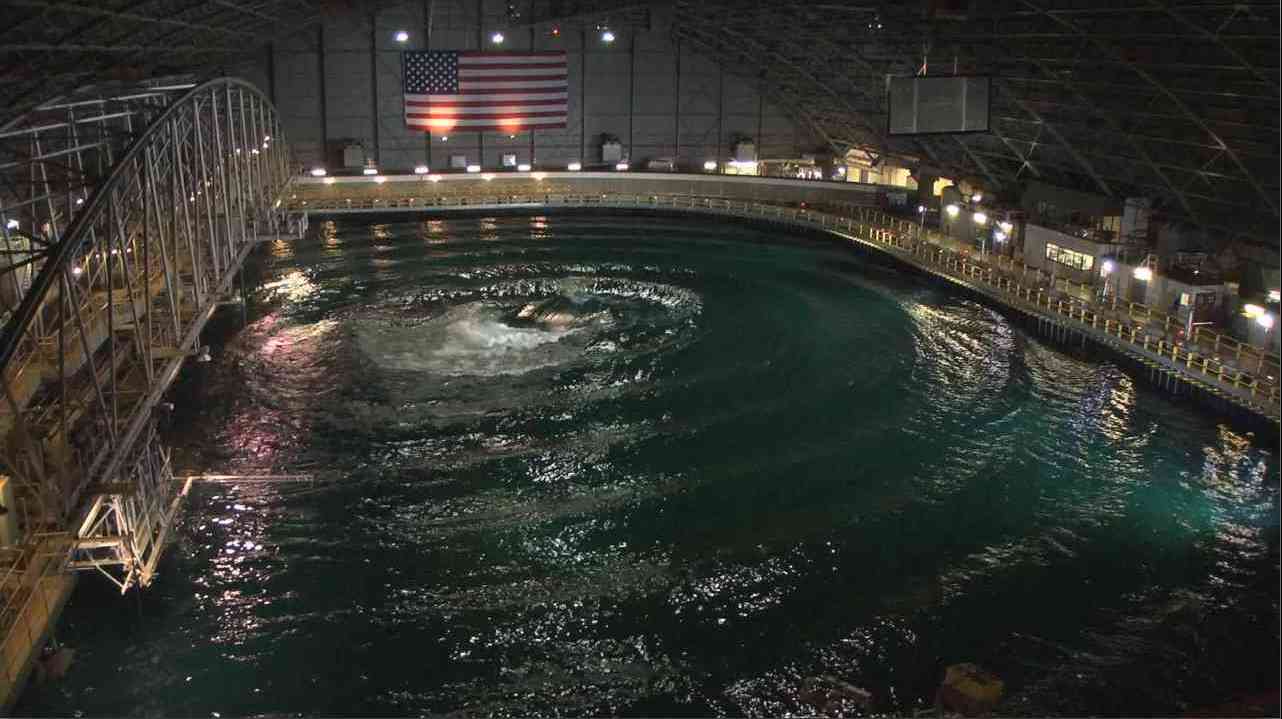 The Wave Energy Prize is open to U.S. entities, including U.S. persons and companies as well as foreign companies that are incorporated in and maintain a primary place of business in the United States. To learn more or to register your team, visit www.waveenergyprize.org. Registration is scheduled to close on June 15, 2015.

DOE and its partners will continue to make key investments to ensure that a cutting-edge research portfolio will produce the next generation of wave energy technologies and jump-start private sector innovation, providing clean energy sources that can contribute to our nation’s energy independence. More information on DOE’s current wave energy activities is available at http://water.energy.gov.