There is a growing need for advancement in Autonomous Underwater Vehicle (AUV) technology and capabilities to perform effective deepwater pipeline inspections, allowing operators to take full advantage of the efficiencies to be gained through the use of autonomous inspection systems. Oil & Gas (O&G) companies are proactively developing new specifications for AUV pipeline inspection surveys that will necessitate AUV suppliers and survey service operators to enhance their existing capabilities. These advancements will provide superior data quality and result in improved integrity management of subsea pipeline assets while also reducing the dependency on expensive surface vessels.

The predominant practice today is to perform ROVbased pipeline inspections that have been an evolution of the best practices used by O&G service providers as new inspection sensors and post-processing data products are developed or fielded and lessons learned. AUV-based pipeline inspection is considered to be an emerging technology that provides the benefits of advanced autonomy and new sensor technologies to perform more cost-effective operations in deepwater, including faster inspection speeds, safer operations without the need for a tether and following surface vessel, more stable platform, and smaller support vessel.

Although there are many benefits associated with AUV-based pipeline inspections, there are also a number of technology challenges driven by the absence of a tethered surface-supported vehicle and the lack of real-time sensor data display for the operator. Sensing and reacting to the presence of seabed and pipeline conditions such as partial burials, debris, berms, free spans, and pipeline motion are extremely challenging in the absence of operator input when such anomalies are encountered.

Lockheed Martin continues to enhance its Marlin® AUV portfolio of capabilities with the addition of a robust pipeline detection, tracking, and inspection capability. The goal is to explicitly address the environment-based shortfalls in existing technologies and to advance pipeline tracking and inspection technologies to increase the utilization of AUVs in the O&G industry. With these advancements, the benefits of AUV-based inspection can be fully realized as a result of the increased reliability of pipeline trackers and consequent improvement in inspection data quality. 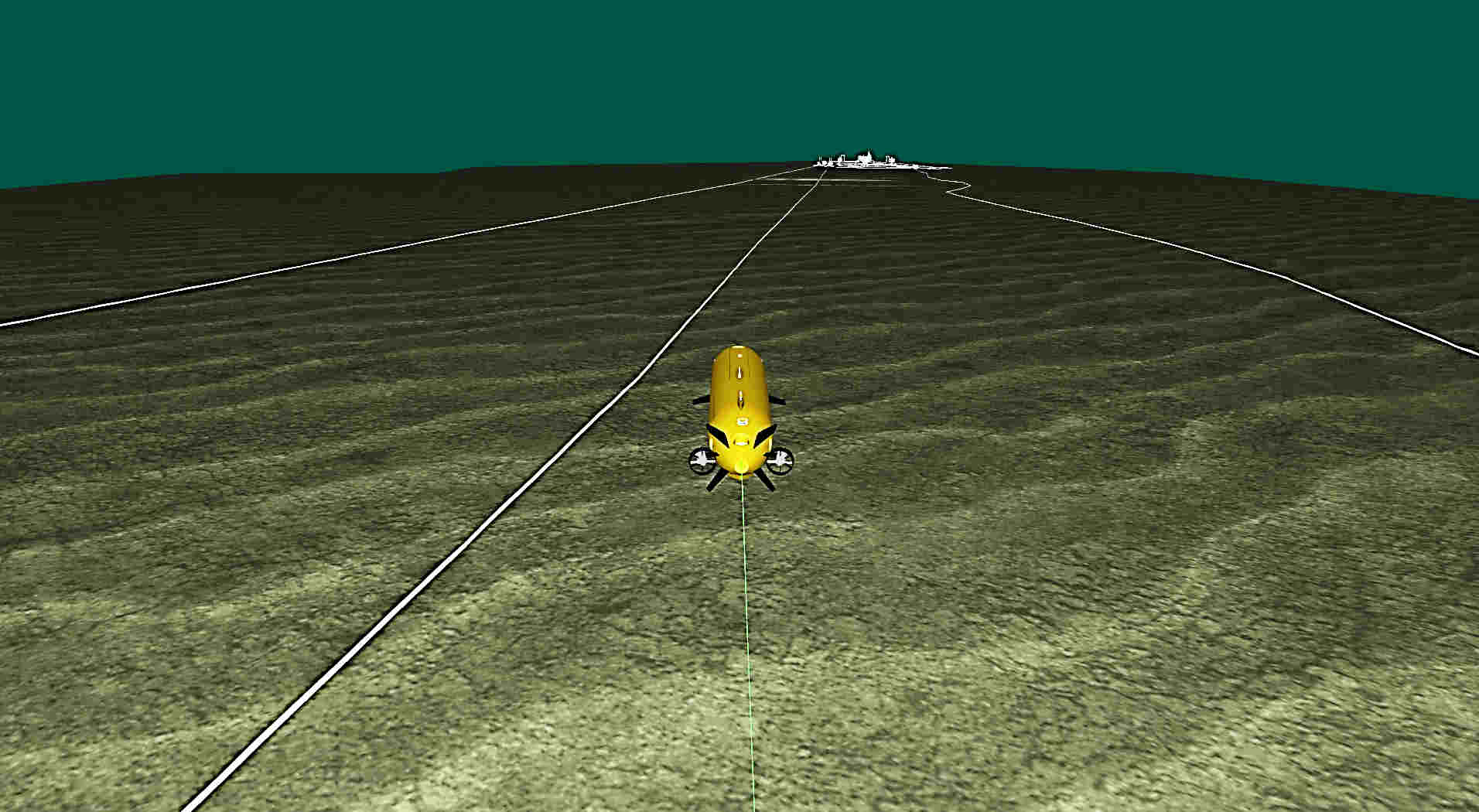 Marlin® AUV with pipeline tracker in detection stage in a comprehensive simulation environment.

Some of the major challenges in developing a robust pipeline inspection capability include:

• The presence of bundled, forking, crossing, and partially buried pipelines;

• The presence of bottom features such as berms, free spans, and clutter;

• The ability to contain navigation error growth over time;

• The ability to detect and measure the movement of pipelines;

• The ability to detect and localize features and pipeline anomalies;

• The ability to measure vertical and horizontal deformation;

• The ability to provide adequate feedback over a very low bandwidth communication link to the operator to ensure data quality and mission progress; and

• The level of autonomy for mission planning, mission operation, and contingency management, including obstacle detection and avoidance.

To increase robustness, system design begins with an analysis of common failure modes and the root causes of these failures. The primary challenge in AUV-based pipeline inspections is the uncertainty in the operating environment and the absence of operator feedback, which could result in the AUV losing track on the pipeline and having to re-acquire it, thereby diluting one of the chief benefits of AUV-based inspections.

Environmentally driven issues are addressed by two main innovations — a robust tracker that is tolerant to object and surrounding feature clutter and unknown/changing numbers of pipelines and the capability for fusion of a priori information such as bathymetric charts and field infrastructure maps with the sensor information to account for moved or partially buried pipelines. The autonomy system of the Marlin® AUV is designed to automatically initiate a tiered set of re-acquire maneuvers designed to re-establish a track on the pipeline if lost. The tracker is implemented as a two stage — detection and tracking — system to effectively decouple the sensor-based detection step from the tracking step, enabling the tracker to be easily customized for alternate sensors.

The Marlin® system uses traditional navigation aiding — INS, GPS, DVL, and USBL — and also uses a host of emerging advanced navigation aids such as terrain-relative navigation, structure/feature relative navigation, and map-based navigation. All available aiding is optimally fused both in real-time and in post-processing to achieve a very high level of positioning accuracy. This allows for a two-pronged approach where real-time navigation error growth is constrained by fusing disparate navigation aids as they become available to allow the AUV to complete its mission and gather the relevant data. Post-processing can be used to globally optimize the positioning and consequently improve the quality of the data product. 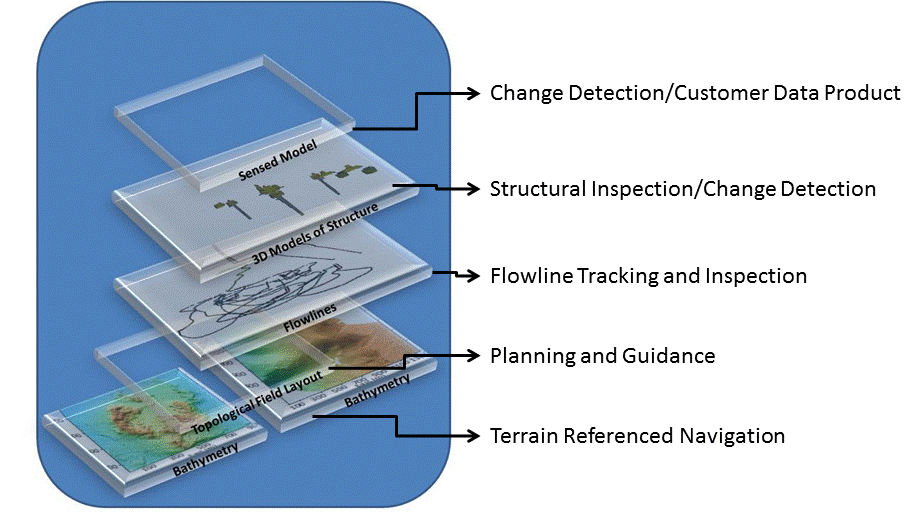 Figure 1. Illustration showing use of maps and other a priori information as part of the Marlin® autonomy system.

The use of maps and other a priori information is an integral part of the Marlin® autonomy system as illustrated in Figure 1. Feature maps are used for mission planning and feedback in addition to providing inputs to the tracker to ensure tracking integrity through partial burials. Bathymetric maps are used for terrain-relative navigation. 3D models of structure are used for very accurate structure relative navigation and change detection. Maps may be available to the Marlin® system prior to the beginning of a mission; however, if there is no prior knowledge available, a survey map will be created by the Marlin® system when it first encounters the area for reference aiding during the performance of the active mission.

In addition, advancements in technologies such as AUVbased 3D sonar and laser imaging and real-time 3D model building from a fast-moving AUV enable more precise navigation, robust pipeline tracking, and autonomous change detection. These capabilities result in the generation of high-resolution geo-registered 3D models that enable sophisticated data collection and analysis techniques and the ability to autonomously identify and measure changes in critical pipeline and seabed conditions such as free span, scour, berm, buckling, lateral movement, and anode depletion.

The long-term benefits of AUV-based pipeline inspection are significant. First, the field operator reaps the benefits of AUVs over ROVs, including smaller vessels and crews, faster surveys with better data quality, and higher operational safety and efficiency. Second, the use of pre-planned, repeatable autonomous inspection missions enables the collection of consistent, parallel datasets and the methodical comparison of inspection results to prior inspection results. Finally, the availability of detailed 3D models with geo-tagged data from prior surveys, combined with the efficiency of third-party software tools for 3D analysis, will improve the efficiency of structural integrity management and translate into lower overall life-offield costs.

As AUVs and new sensor technologies become more sophisticated and the reliability and the economic benefit of their advanced autonomy continues to be successfully demonstrated, it is evident that the Marlin® family of AUV products slated to address pipeline inspections will be well positioned to meet the needs of the O&G market’s inspection needs, not only for pipeline inspections, but also for deepwater facility inspections, integrity management, life-of-field programs, and future field and subsea resident applications. For more information about Lockheed Martin’s Marlin® AUV system, please visit http://www.lockheedmartin.com/us/products/marlin.html.